Op-ed: Winter has arrived, thousands left at its mercy in Greece’s hot-spots 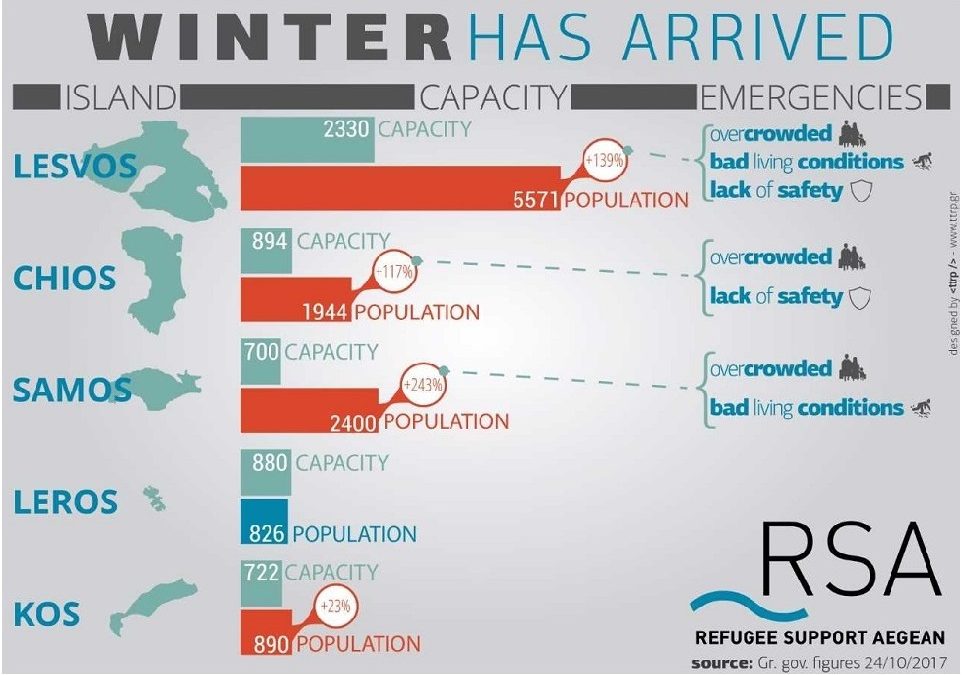 Despite repeated warnings from numerous organisations thousands of refugees are going to suffer in the hotspots as weather deteriorates. The Greek government has failed to react and the geographical restriction policy, a key element of the EU-Turkey deal, keeps thousands trapped within overcrowded hot-spot facilities. People, even very vulnerable persons, like medical patients and families with newborns, have to wait there until the first hearing of their asylum case.

A spike of arrivals since August has exhausted resources and capacity in the hotspots in most of the islands. Conditions are dehumanizing, infrastructure is collapsing and authorities are unable to cope. Last winter five people perished and thousands suffered for months in the cold and rain. Minister of Migration Giannis Mouzalas has responded to criticism by saying these deaths made us “wiser”. However, winter has arrived again in the northeastern Aegean islands and heavy rain is turning the hot-spots into a quagmire. The scene is set to repeat the disastrous fiasco of last year. A short look at the situation across the hotspots is enough to confirm that.

The capacity of the hotspots in Lesvos, Samos, Chios is exceeded by somewhere between 100 and 250 per cent. People including vulnerable groups like children, sick people and pregnant women are accommodated in anything from small summer tents to makeshift shelters and damaged prefabricated houses, left at the mercy of the hard weather. Further the lack of hot water and limited sanitation makes hygiene a problem and with very few NGO’s still operating in the hotspots there is a shortage of even basic provisions like milk powder and diapers on top of the extreme conditions. Traumatized, mentally ill or disabled people do not have sufficient access to proper medical, psychological support and treatment and the with the combination of confinement, lack of information and perspective tensions are running high with incidents of violence and self-harm.

Perhaps the best illustration of the conditions Europe offers thousands of extremely vulnerable people in need of protection is the personal experience of a 29 year old torture victim from Congo – an inhabitant of the Moria camp in Lesvos. During last winter a woman and a small child died in front of her eyes when a gas canister they used for cooking exploded inside their tent. She was still living in a tent when Moria was covered by snow last January and 3 refugees lost their lives by inhaling toxic fumes produced by garbage they burned to keep them warm during the night. Following these deaths she was transferred for a short period to a hotel in Thermi as many other Moria residents. After a month when the weather improved she was transferred back to Moria. Today she lives in a family sharing a few square meters with another 24 people. «Every time I open the door of the container I walk through crowded tents full of families with small children. They can’t reach the toilets so they enter our container to use the toilets». «When it rains all families enter our container. They stand up all night as there is no place to sleep» she says concluding «I suffered so much in Moria. I waited so long to leave the island”.

Winter has indeed arrived and with it the question of whether EU and the Greek government should be allowed to leave some of the most vulnerable people in the world at the mercy of it – for Pro Asyl and Refugee Support Aegean the answer is NO!