Editorial: Will European Politicians Catch Up with their Future Voters on Climate March? 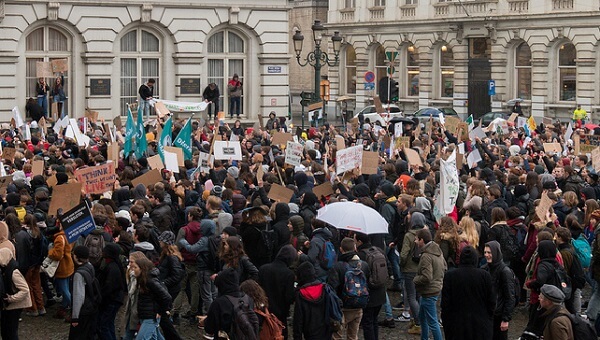 For the third week in a row, more than 30,000 young people from all corners of Belgium marched through Brussels this Thursday to demand action on climate change. Despite sub-zero temperatures, their energy and determination was clear. It took almost an hour for the march to pass such was its size. It is inspiring similar marches across the continent. So much for the supposed apathy of the young.

In Brussels, they can target the EU, the Belgian federal government, and various other governments and parliaments so let’s hope that some of these policy-makers act on their calls. The media coverage has not been sufficient yet, especially when compared to the disproportionate response to a few hundred Gilets Jaunes. The climate march has 100 times more participants and no sign of the aggression that characterises the “yellows”. Policy-makers might also note that many of the young marchers are eligible to vote or soon will be in a country where voting is compulsory including in the European Parliament elections. EU policy-makers should be jumping on the bandwagon and associating themselves with this action: young Europeans, active and campaigning for change on an issues where the EU is strong? There’s even a link with security, as climate change is considered the second most significant security threat by Europeans, thus allowing for some security-related posturing. What’s not to tweet?

Those working on refugee rights should also support the young marchers. Climate change displaces people. It is a serious cause of forced migration, both directly through environmental degradation and indirectly through generating conflicts. This week, another major study demonstrated how climate change causes conflict, especially conflict over resources but also other types of conflict, which then pushes people to flee for their lives. Climate change is among the root causes of many of the most serious contemporary refugee situations, from war in the Middle East, notably Palestine and Yemen, to mass displacement in South East Asia. Even the USA recognised back in 2009 that climate change is a threat to its own national security due to the conflict and displacement it generates. In light of the Climate-denier in chief now installed there, as well as persistent inaction from others, Europe could and should play a greater role.

First, tackling the “root causes” of migration is high on the EU’s policy agenda (for good and bad reasons). That means tackling climate change and the conflicts it leads to. Unfortunately, in recent years “tackling the root causes” has become synonymous with prevention of migration to Europe, through measures such as supporting dubious security institutions (or militias) to close borders, contain people, and disrupt migratory movements that may have very little to do with Europe. Closing porous borders is not addressing the root causes of displacement, and these measures are often counter-productive as they reinforce the actual causes of displacement – repressive governments, insecurity, economic problems, etc. In addition, the priority should be tackling the causes of forced displacement, not the causes of migration more generally, which is inevitable and usually positive, so Europe’s efforts need to be more targeted at the negative displacement situations.

Second, Europe’s role in generating climate change (and related conflicts) should also be addressed. That means tough changes in lifestyle, in trade policy choices, and in engagement with the rest of the world. The EU is well-placed to play a role with the resources and expertise in DG CLIMA. Nonetheless, the contradictions are manifold as its efforts to tackle climate change are undermined by other policies.

Third, climate change displacement raises dilemmas at the level of refugee status determination that need to be addressed. Often those displaced directly by climate change will not be recognised as refugees; in the case of climate-linked conflict and breakdown of public order they may or may not be recognised. There are campaigns to revise International Refugee Law to change this, however, while better protection for “climate refugees” is supported by many, it is simply too risky to open up the international legal framework because – to their shame – European governments would use the process to reduce the rights of refugees in general and to further restrict the categories of people entitled to protection. This is not a risk – it is a certainty.

Thus, the solutions lie in complementary protection frameworks, i.e. expanding the use of other protection statuses and other forms of the legal right to remain and accompanying legal rights. Unfortunately, there are dangerous ongoing political attempts in Europe to downgrade or even abolish the different protection statuses that complement refugee status, with the most alarming being the Italian government’s elimination of humanitarian protection status, accompanied by a battery of falsehoods about its use. Salvini aside, as ever the European Commission, certain “mainstream” EU leaders and think-tank commentators contribute to the process by adding to the attacks on other protection statuses, and classifying people awarded them as “undeserving” or “opportunistic”. That there has been widespread support behind the scenes for Salvini’s efforts is shameful. The same people who decry the Refugee Convention and Protocol as out-of-date attack the very complementary protection options which are the most obvious and practical way to update the legal framework to respond to contemporary protection needs and to properly manage forced migration.

Also as usual it is countries outside Europe that host the vast majority of persons displaced by climate change. Providing these countries with the support they need, as well as taking on a fairer share of responsibility could assist. Supporting the displaced has to be linked to building resilience, as well climate change mitigation and adaptation strategies, which including conflict resolution measures, combined with the prevention efforts mentioned above. Operational recommendations from UNHCR, the Global Compact on Refugees itself, and the work of the Nansen Initiative Protection Agenda all offer guidance and tools for how to do this, which could be better integrated into EU external action.

Prioritising climate change is also about supporting refugees because climate change is intrinsically linked to the current displacement crisis as a cause and an exacerbating factor. We should thus fully support young people’s climate marches and their efforts to stimulate action – we need their political engagement. Allez les jeunes!