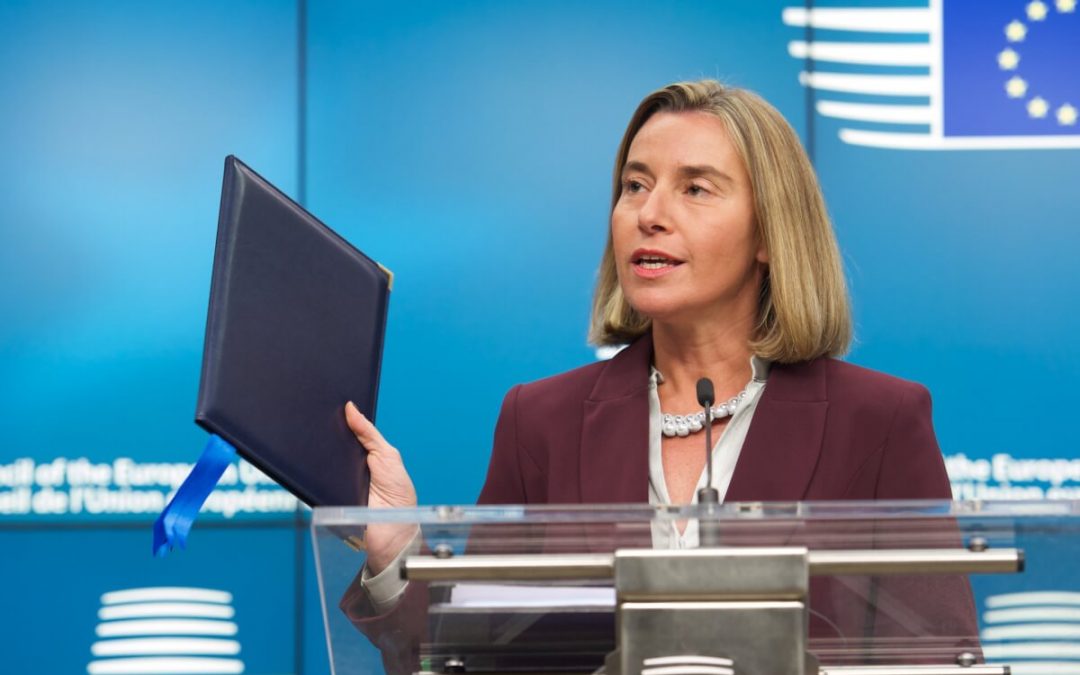 In a valedictory speech today, outgoing EU High Representative for Foreign Policy, Federica Mogherini, summarised the achievements of her five years in the job. It is fair to acknowledge her successes: a continuation and defence of multilateralism despite the backlash against it from tin pot and golden palace demagogues – from Orbàn on the GCM to Trump on everything; the EU Global Strategy, used as guide; defence cooperation; support to accession of the Western Balkans (although describing the EU’s work as “incredible” might be stretching it…); and efforts to build resilience in Ukraine.

The tally is certainly better than at the end of her predecessor’s mandate, when the positives of the Iran deal and a bit on Kosovo combined with the misguided mess of the Comprehensive Approach – one long futile battle to control humanitarian response –and a parlous situation in the EEAS – despair, hostility and absence of political leadership. So Mogherini deserves credit. And yet…

Right at the start of her speech, Mogherini referred to developing “a coherent policy on migration” as a success, but did not dwell further on the topic; it remained present though, casting a shadow, referred to and alluded to in the debates that followed. For Mogherini, as for her successor Josep Borrell, migration (or European agendas on migration) presents a risk and a dilemma. Yes, migration is one of the great global issues of our time and must be part of EU external policies. But how can that be achieved without allowing it to capture, dominate and undermine EU external action?  This is exactly what will happen if the diplomats don’t resist.

There is not one shred of doubt that policy-makers in the “internal security” domain, plus certain heads of state, and other more shadowy interests, want to use all foreign policy tools to prevent migration to Europe – they even say as much. Indeed, the missions presented to the incoming Commissioners say as much.

The incoming HR/VP, Borrell, will be a continuation of Mogherini in many senses – a foreign minister for a southern Member State, centre-left, and left-ish centre left, with a good sense of diplomacy. He surely knows that turning the EEAS into a machine for migration control is counter-productive and damaging, and just does not make for serious and credible foreign policy. But how will he resist the migration panic merchants?

Ultimately it has to be understood that “managing” migration is not about beating people back at borders. It is about collectively working – including with organisations and countries in other regions – to above all prevent and then respond to forced displacement, while taking advantage of migration through choice. Often that means simply using external policies for their intended purpose – however unsexy that may sound. Development policy for the SDG, security policy to – er – create security (including for people in countries where they are at risk of forced displacement), trade policy for – trade. It also includes making sure that displaced persons have access to safe and legal routes to protection and that migrants have access to status – as is the case for the millions of Ukrainians granted the right to work in the EU (one displacement crisis that has not been totally mismanaged). It isn’t that difficult.

The EU will always be called on to respond to crises but its real strength lies in long-term work – it stays longer, invests more, and has more tools and a broader approach than many other (aspiring) “global actors”. Working to limit the risks of forced displacement can be part of that if it means a focus on supporting security, governance and livelihoods for people in other countries. These actions are of course primarily the job of the people, institutions and governments of those countries but the EU and European governments can either support their efforts or undermine them, for example by diverting resources to use as “leverage” to buy support for a handful of readmissions or for containment of people trying to move.

In response to a question, Mogherini distanced herself from the language of “protecting” Europe, Europeans and the European way of life, saying this came from the “internal” side and needed to be refined. As well as the controversy over the Commission portfolios, similar language appears in the Strategic Agenda adopted by the Council (condemned by ECRE here). The sense given is of protecting us against them and it is hugely damaging to diplomatic relations, particularly with Africa, where many of these successes are eclipsed by the perception (and often reality) of hostile EU migration policy.

Judging by the questions and debate, defence cooperation is perceived by many as Mogherini’s main success. She claimed that it had advanced further in five years than in the previous forty. Hyperbole aside, some of this is important. It could be that collective European defence is cheaper and more effective than every Member State running its own defence policy. It could be. It could also be that the building of European defence policy and funds simply creates a massive trough at which the defence industries of Europe fill their snouts.

Will it actually improve security because, after all, how many contemporary security threats can be addressed by defence in the sense of military action and building capabilities? Again migration lurks.

In her hearing at the European Parliament, the incoming Commissioner for Home Affairs rejected the idea that migration is a security threat, a very welcome statement. Unfortunately, the conception that migration is a security threat has become ingrained. Among the many negative effects of this, such as detracting from actual security threats, is the intrusion of powerful lobbying interests who have an ever-expanding role in defending Europe’s borders. With the expansion of European defence and the amount of money coming on stream, they can benefit from displacement at all points in the migratory routes. We can but hope that Borrell is fully aware of all of this too.

Mogherini concluded with a discussion of “cooperative autonomy” – an alternative to “strategic autonomy” which she has developed to describe the interconnected (and actually not autonomous) nature of EU defence. She will no doubt go on to develop this thinking further in her next role, in a think-tank or in a return to Italian or international politics. The battle will continue, though, for greater autonomy of EU foreign policy in the sense of limiting the control and influence of the misguided internal agenda on migration. Let’s hope that Borrell’s willingness and readiness to engage are apparent in his EP hearing on Monday.