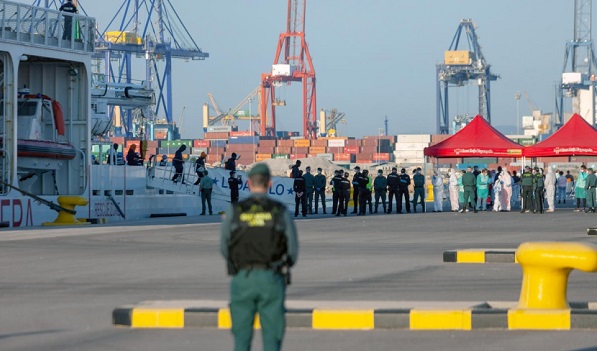 The UN Refugee Agency (UNHCR) has published its updated report on the situation of people trying to reach safety in Europe via the Mediterranean. The Desperate Journeys report finds that the crossing has become even more deadly; the total number of people arriving in Europe has fallen yet the death rate has risen sharply. More than 1600 people have died or gone missing trying to reach Europe this year.

Between January and June 2018, Greece received the most arrivals or refugees, with 22,000 people recorded crossing both land and sea. By July Spain had become the primary entry point to Europe with 27,600 arrivals. In Spain and Greece, the numbers of arrivals have increased in comparison to the same time frame in 2017, however in Italy they have fallen. In total this has meant a 41% decrease in people reaching Europe via these three countries.

The enhanced capacity of the Libyan Coast Guard to intercept boats carrying refugees and migrants and return them to Libya has significantly reduced arrivals to Italy, as has the blocking of access to Italian ports for those rescued at sea. However, while the numbers of crossings have decreased, the death rate of those crossing has increased. One in every 18 persons who tried to reach Europe via the Central Mediterranean route between January and July has died or gone missing.

UNHCR report that the high number of deaths is due to the decreased capacity of NGOs to operate search and rescue missions at sea since 2017. Rather rescues and interventions have been carried out primarily by two Libyan Coast Guard Patrol Vessels, further from shore. This has forced refugees and migrants to remain on unsafe vessels for longer periods and cover longer distances with fewer actors to assist in the event of a capsize.

The report shows that the number of unaccompanied children arriving in Europe via the Mediterranean has decreased significantly from 13,300 to 3500. However those that have reached Europe are still extremely vulnerable- on Chios, Samos and Lesvos, unaccompanied children have been accommodated with adults in over- crowded tents without adequate access to services or mental health support.

The UNHCR report offer a number of recommendations to European states, including to increase access to safe and legal pathways for those in need of international protection, to strengthen protection mechanisms and psycho- social support for children, and to develop a regional and collaborative approach to disembarkation.

The release of the report marks 3 years since the body of Syrian toddler Alan Kurdi was found on a Turkish beach, having drowned trying to reach Europe alongside his mother and brother. Writing a foreword for the report, author and UNHCR Goodwill Ambassador Khaled Hosseine comments;

“Although sea arrivals in Europe have dropped dramatically since Alan Kurdi’s death, the public debate around this issue has heightened, and grown ever more divisive.  Amidst all this, the memory of Alan’s tragic end has been fading, as has the collective outrage that gripped the world when photos of his dead body went viral”.