“To Dublin or not to Dublin?” ECRE publishes policy note on policy choices and the Dublin system 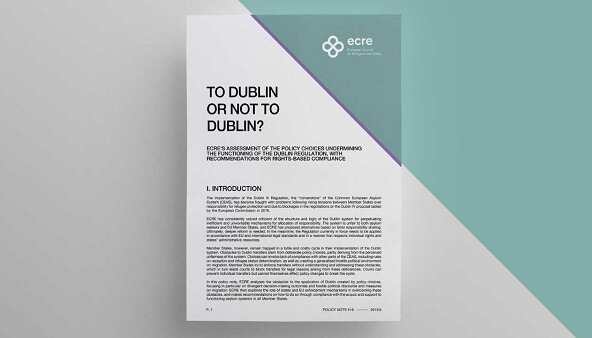 The latest Policy Note published by ECRE assesses the policy choices undermining the implementation of the Dublin Regulation and makes recommendations for rights-based compliance with the current system on responsibility for asylum applications.

Member States remain trapped in a futile and costly cycle in their implementation of the Dublin system. Obstacles to Dublin transfers stem from deliberate policy choices such as lack of compliance with Common European Asylum System (CEAS) standards, including rules on reception and refugee status determination, as well as creating a generalised hostile political environment on migration. These choices are partly made due to the perceived unfairness of the Dublin system, which has been consistently highlighted by ECRE among others. Member States try to enforce transfers without understanding and addressing these obstacles, which in turn leads courts to block transfers for legal reasons arising from these deficiencies. Courts can prevent individual transfers but cannot themselves effect policy changes.

To break out of this cycle, ECRE recommends Member States to adopt clear instructions precluding the transfer of asylum seekers to Member States in which they would be at risk of direct or indirect refoulement, on the basis of objective evidence. Where a Member State is deemed to raise risks of refoulement, Dublin Units should promptly make use of the Regulation’s “sovereignty clause”.

The EU institutions also have a duty to ensure that the CEAS is implemented and complied with. The European Commission should thoroughly assess states’ compliance with fundamental rights in Dublin implementation as part of their country monitoring of overall the implementation of the CEAS, and initiate infringement proceedings where systems are not brought in line with standards. The European Parliament should make use of parliamentary accountability mechanisms to ensure that monitoring actors perform their tasks.