Thousands of migrants caught up in intense fighting in Sabratha 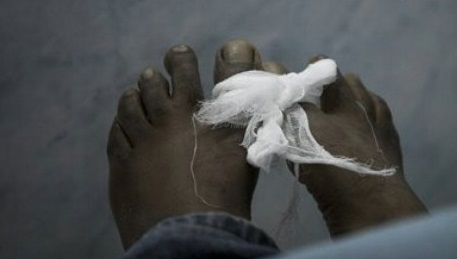 After three weeks of fights between rival groups in Sabratha, that left at least 43 dead and 340 wounded, Libyan authorities took control of various informal detention centres and camps previously run by criminal networks where 4.000 to 6.000 refugees and migrants have been held here under “very difficult conditions”.

The larger share of the migrants (2600 by 7 October) including pregnant women, newborn babies and unaccompanied minors have been transferred to a hangar of the Libyan Directorate for Combatting Illegal Migration (DCIM). Most are in urgent need of food, water, medical treatment and psychological support. According to IOM, Libyan authorities plan to transfer migrants gathered in the hangar to official detention centres in Tripoli. DCIM is in the process of transferring 2.000 migrants already.

“We are seriously concerned by the large number of migrants caught up in recent developments in Sabrata. Alternatives to detention must be found for migrants in Libya. In the meantime, IOM continues to provide direct humanitarian, health and psychosocial assistance to meet the urgent needs of the thousands of migrants being affected.” said Othman Belbeisi, IOM Libya Chief of Mission.

The situation in Libya is volatile and the UN Security Council recently expressed concerns over the “deteriorating security, economic and humanitarian situation in Libya …” while the EU mission to Libya EUbam was reported to struggle: “Sustainable progress may remain limited in the absence of a political solution, an end to the military conflict and a return to stability”.

The coastal city of Sabratha is approximately 80 kilometres west of Tripoli and counts as one of the main departure points for migrant boats attempting to cross the Mediterranean Sea to Europe. In September Italy denied involvement reported by media in a deal between UN backed Tripoli government and two Sabratha based militia groups to prevent crossings.

Arrivals by sea to Italy has decreased this year and is 26 per cent lower than in the same period last year.  Latest IOM figures document an increase of Tunisian nationals attempting to cross. In September 2017, 1.400 migrants arrived from Tunisia, compared to 1.357 in the first 8 month of the year. “It’s a new trend, but I wouldn’t call it a consequence of the recent ‘closing’ of the Libyan route, because the nationalities are different,” explains Flavio Di Giacomo, IOM Rome.