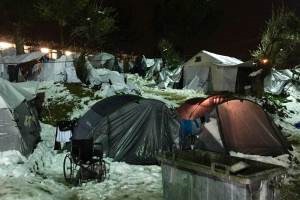 UNHCR in September called for support for Greek camps in Lesvos, Chios, Samos and Leros. Last year substantial funding did little to address the fundamental structural problem of containing asylum seekers and refugees in limbo in overcrowded camps, and so will a continuation of the blame game following the Greek authorities’ operational takeover of the support functions.

“Against a likely rerun of national and international actors passing the buck of operational responsibility, we must not lose sight of the harmful effects inherent in deliberate EU policies. As long as the EU views the EU-Turkey deal as a ‘success’ in migration management and strives for deterrence, conditions in the hotspots will remain dire and unsustainable and asylum seekers will not be transferred out of the islands. Any financial or operational plan conceived within that framework cannot remedy the impact of containment”, says Senior AIDA Coordinator Minos Mouzourakis.

Civil society organisations warn of a rerun of previous winters where refugees and asylum seekers suffered on the Aegean Islands where poor accommodation and the lack of mental health assessments and treatment remain the conditions. Solidarity groups and organisations in Greece call for urgent action as camps on the Aegean islands are ill prepared for the approaching winter. In a joint statement 67 organisations urge the Commission and the Greek government to take steps to “Open the islands – No more dead from the cold”. Last winter, 6 people died as a result of cold under inadequate conditions in Moria, Lesvos.

The joint statement further reads: “The collective stresses that the current situation is not caused by the onset of winter or a sudden increase of arrivals. Rather, it is a direct result of the EU-Turkey Statement and EU asylum and migration policies of exclusion. These policies keep people trapped on the islands for prolonged periods of time, prevent people from ever reaching Europe, and prevent people who are eligible for relocation and family reunification from moving on to other countries in a reasonable time. “