The implementation of the Dublin III Regulation in 2019 and During COVID-19: Different figures, Same Conclusions 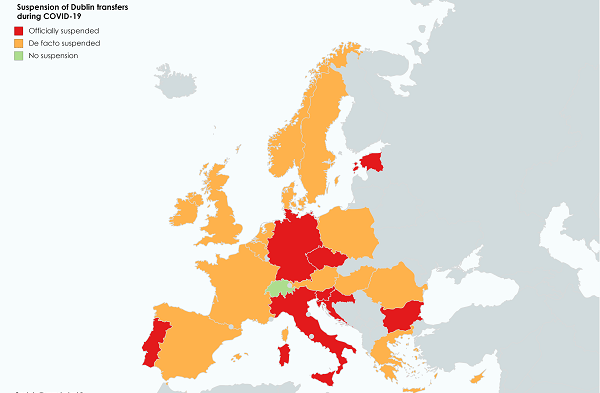 ECRE’s report on the implementation of the Dublin III Regulation in 2019 and the first half of 2020 demonstrates that the European Union’s rules on allocation of responsibility are not functioning in practice, resulting in unnecessary, lengthy, and costly procedures both for asylum authorities and applicants for international protection who are left in a prolonged state of limbo, face reduced standards and at are risk of human rights violations.

Based on current practices, case-law and up-to-date statistics from 29 European countries, this report provides an overview of developments relating to the application of the Dublin III Regulation. It indicates that nearly one in three asylum seekers is subject to a Dublin procedure in countries which have received a significant number of applicants in 2019 such as Germany, France, Belgium, the Netherlands or Switzerland. Yet, the number of persons being actually transferred remains low. More than half the countries covered in the report have a transfer rate below 30%. In Belgium, less than one in ten people channelled into the Dublin procedure is transferred to another European country in practice. Reasons for that are various, such as administrative hurdles and delays; practical obstacles resulting from health and security risks; and the incorrect application of the Dublin criteria. Many Member States continue to trigger requests on the ground of irregular entry and issue ‘take back’ requests to countries with low or insufficient reception capacity and an asylum system that is under pressure, ultimately making the transfer impossible. At the same time, the number of cases in which countries become responsible by default due to non-compliance with the transfer deadline of 6 months has continued to increase significantly; reaching at least 14,000 cases in 2019 – far more than the 2,000 cases registered in 2015.

Despite their potential, the application of the Dublin Regulation’s hierarchical criteria – and in particular the family unity criteria – as well as the application of the discretionary clauses remain illusionary. In at least 13 countries, the share of family unity requests out of the total of outgoing Dublin requests represented less than 1%, while the use of discretionary clauses is not applied at all or only in exceptional cases in several other countries.

In terms of procedural guarantees, practice shows important divergences from one country to another, particularly noticeable at appeal stage e.g. regarding appeal deadlines, suspensive effects and access to legal assistance. National courts have continued to deliver guidance on individual cases in this regard as well as on the duty of sending countries to obtain guarantees to ensure the legality of Dublin transfers in compliance with EU standards and the European Convention on Human Rights. Nonetheless, applicants continue to be transferred to countries where dysfunctions in the asylum system and reduced standards for Dublin returnees are widely documented. For the first time in recent years, two persons have been transferred from Austria to Hungary in 2019 and 2020 respectively.

In the first half of 2020 the Dublin system was further challenged following the outbreak of COVID-19. Emergency and measures containment measures affected the implementation of Dublin transfers, as Member States closed their borders and reduced travel and air traffic. Nevertheless, countries such as Germany and Switzerland continued to transfer people despite the health risks, albeit at low numbers. The German authorities further announced the suspension of the deadline to carry out transfers inter alia in order to avoid a situation whereby responsibility shifted back to them, a truncated measure that was ruled against by national courts and refuted by the European Commission’s guidance of April 2020. Yet, this shows that, even at a time of a world pandemic, Member States continue to opt for policy choices which are aimed at all but taking responsibility for persons seeking international protection.