The ‘cornerstone’ of CEAS continues to operate in opacity 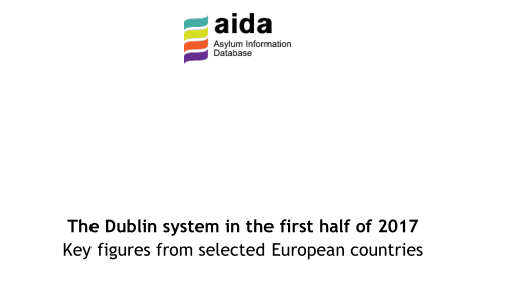 A new statistical update from ECRE’s AIDA database for the first half of 2017 represents the most solid available information on the use of the Dublin Regulation. The report seeks to fill the information gap created by the systematic reluctance of Member States to comply with the Migration Statistics Regulation and the consistent failure of Eurostat to publish updated statistics.

“Figures for 2016 which Member States were bound to submit by the end of March 2017, were not available by early July 2017 when the European Asylum Support Office (EASO) published its annual asylum report. This persisting lack of information hampers meaningful debate on the challenges and dysfunctions of the Dublin system – civil society alone cannot fill the knowledge gap,” says Senior AIDA Coordinator Minos Mouzourakis.

While figures show an increase of outgoing transfers for most countries operating the Dublin Regulation the allocation of responsibility for asylum seekers remains uneven across European countries.

There is a general increase in outgoing Dublin transfers across Member States. While the rate of Germany rose from 7.1% to 10.3%, Austria marked a substantial increase from 12.1% to 34.3%. Germany and Austria have transferred almost as many asylum seekers in the first semester of the year as they did in the entire year 2016, while Greece has transferred nearly double the number of persons transferred last year.

Germany has also been the main country at the receiving end of the Dublin procedure, counting 4,144 incoming Dublin transfers. The Dublin procedure in Germany has been heavily debated in recent months due to a change of practice vis-à-vis requests from Greece. The number of requests issued by Greece dropped from 2,514 in the first quarter of 2017 to 953 in the second quarter, as did the number of actual transfers – from 837 to 379. All of these transfers concerned family reunification or the application of the dependent persons and humanitarian clauses. The reduction of Dublin procedures stems from a controversial informal agreement between Germany and Greece to slow down the rate of family reunification.

The situation of incoming Dublin procedures to Hungary also merits closer consideration. While it remains among the main addressees of Dublin requests so far in 2017, Hungary has received far less requests this year (4,324) compared to last year; when it counted as many as 26,698. Its main incoming requests have been sent by Germany, Austria and France. However, only 128 people have been transferred to Hungary during the first half of the year.