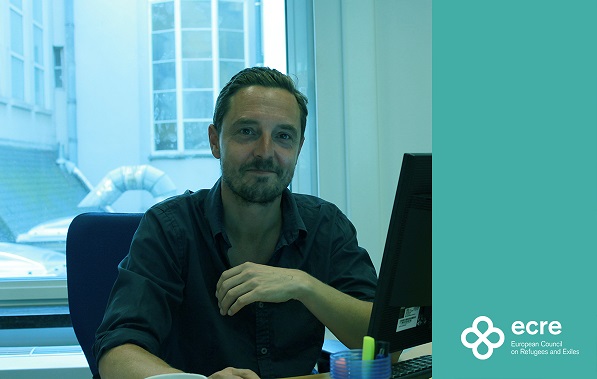 The ECRE Communication team works to turn ECRE knowledge and expertise into effective messages towards the public. ECRE has a substantial and increasing audience through 40.000 followers on social media (Twitter and Facebook), 13.000 direct subscribers to our organisational newsletters (ECRE Weekly Bulletin and ECRE Daily Press Review) and press work including interviews with leading international and European media. The ECRE Media Officers Network (EMON) ensures cooperation, coordination and information sharing across the ECRE membership of 99 NGOs active in 40 European countries.

Since 2015 there has been a general mobilization of civil society to counter the increasingly harsh discourse on refugees, migrants and asylum seekers. There are a lot of new voices and ideas out there – how does ECRE see this development?

The political melt-down since 2015 has allowed far-right populism to set the tone and move from the political periphery to the centre of attention. The counter reaction from pro- human rights agencies, institutions, academics, civil society and an impressive number of private citizens organising at grass root level has produced some creative, effective and refreshing ideas on ways to deliver and target messages to broader audiences. On the strategic level this involves things like public opinion studies, the inclusion of psychological profiling and more sophisticated segmenting of our target groups, and on the practical side we have seen social media used cleverly to mobilise around events, create informal groups that enable direct support and contact between new and old Europeans and allow hard-hitting or humoristic content to go viral when it would otherwise have been simply decorating someone’s refrigerator or have been sprayed on a city wall.

However, we cannot uncritically adopt or reproduce ways of communicating because they are innovative or popular and there are a few important dilemmas to be faced. One is the balance between appeal and substance – while the broader public might find the structural externalisation of protection complex or abstract, and the Search and Rescue operations on the Mediterranean more comprehensible, we as human rights communicators cannot simply ignore the broader causality. Another and inter-linked issue is the balance between impact and integrity – we feel outgunned, outsmarted and frustrated by the ‘success’ of calculated and strategic misinformation from the populist far-right – but when we introduce segmenting and targeted communication of our own it is obviously vital that we do not allow the potential impact of our messages to corrupt the responsibility we have to raise the inconvenient/unappealing truth, or to fabricate a more convenient/appealing truth. For instance, if we are out to discuss the proportions of refugees that different countries are hosting, and point to Lebanon with little more than 4 million citizens but 1.5 million Syrian and Palestinian refugees, we cannot ignore the tensions it causes in the country or ignore the lack of support and protection that they face in the country.

How does ECRE see the challenge of countering the current narrative? Have you revised your strategies? How can you contribute?

For us strategic communication is fundamentally about consistency, coherence and authenticity and ECRE’s essential ‘currency’ as an organisation is its legal and policy expertise and impact, and that is our strategic starting point – how do we convey those insights to a larger segment of the European population? How do we communicate it in a way that makes it relevant beyond a narrow audience of experts? And how do we ensure that we do it without jeopardizing our identity and mandate?

We have tried to do it gradually and according to a defined strategy with clear objectives that we benchmark against, rather than through ad hoc experiments. ECRE outlets like the Weekly Bulletin or platforms like the organisational Twitter account have not become key-references for researchers, journalists, academics, institutions and a selection of the public overnight, and in that sense I was standing on the shoulders of generations of ECRE staff members when I joined in 2017. That is not something to throw away but something to build on.

We have done it by supplementing or adjusting the existing portfolio of outlets and formats, for example by introducing a weekly editorial by our Secretary General with a very direct and straight analysis of political developments, by lending our social platforms to people of refugee background without framing or editing their contribution, by running slightly more unconventional op-ed’s and interviews with external sources, and by reducing complexity as much as possible and in general having a bit more edge.

We also adjusted the press work that had been modest for a few years. We never send out broad press releases or statements and we only occasionally target selected journalists with background information of specific interest to them, but we now have requests from media including the leading international outlets on a daily basis. Their interest is mainly organisational knowledge such as comparative statistics, case law or policy analysis and the entry point often Tweets or Weekly Bulletin articles presenting newest research – illustrating the importance of coherence across platforms. We are not out to brand the organisation through media hits, we are out to change the narrative – in many cases exchange facts for myths. So, we are very selective with which interviews we give – if we are not the best source we refer people on and if we are not convinced of the angle or agenda we decline. But we are always ready to provide background information and perspective to assist or qualify the work of journalists.

We work with what we do best and human rights lawyers or policy researchers are not necessarily the right people to make street art, public events or communicate via snapchat, much like young activists are not necessarily the right people to undertake cases at the European courts or conduct comparative research. It’s a delicate balance between appeal and honesty but it always starts with knowing your organisational strength and identity.

Communication is neither an independent exercise or organisational add on – if for instance we ran a campaign in a tone totally foreign to the organisation or on a topic on which it had no clear position or knowledge it would damage credibility in the long run even if successful in terms of immediate click rates. Nor is communication simply a tool to wrap and distribute anything an organisation produces or a donor or partner requests – we cannot impose media interest on a capacity building project by spamming random journalists, or make a 65 page report on the CEAS negotiations relevant for a broad segment by giving it a catchy headline on Facebook. What we provide as professional communicators is the knowledge of what is relevant and how it needs to be shaped to be relevant to the broader public. Sometimes these ends don’t meet and it is totally legit to have a project of high relevance for its participants or a great report on CEAS negotiations deeply relevant for an expert audience without attempting to distribute widely. By making that judgement we also free the needed resources to focus on our most important and promising communications. Limited resources is a real challenge for us as well as many other civil society organisations.

In the overall battle of the European narrative on refugees and migrants, we on the pro-human rights side need to enhance each other’s’ work and do so based on our individual strength – for ECRE that is the accumulated knowledge and practical experience with case law, policy and practices at EU and member state level. That is the basis for references to ECRE research by EU institutions, that is the basis for ECRE interventions in principle cases at European and national courts, and in the same way it is the basis for requests from leading media outlets across the globe, and the basis of our ability to support our 99 member organisation in their communication efforts. ECRE’s knowledge and experience runs through the full communication portfolio of press work, social media, organisational newsletters and the website, and it is and will be ECRE’s main contribution in the larger battle of opinions.

The ‘inclusion of refugee voices’ is debated a lot in Brussels and across Europe. Is this something ECRE works on?

The inclusion of people with refugee background is a key strategic objective for ECRE and is implemented at all levels of our organisation; through recruitment of four full time core ECRE positions and having more than 30% of our staff of refugee background, by actively signing refugee-led organisations as members, by supporting participation of refugee advocates in all events and proposing refugee advocates for meetings, and through a cash and in- kind sponsorship of the refugee football club R.F.C Syriana- that plays at pro- level in Belgium.

On the communication side we believe that people of refugee background are an asset because of their unique personal experiences and perspectives, but it is not only about including, it is about including in a mutually respectful and symmetric way. However well intended we might be as communicators, there are some problematic tendencies of generalising representations that we need to be aware of because they take away agency and individuality and in some ways contribute to the dehumanization that we are trying to counter. A few examples could be portraying refugees as eternal victims, refugees as thankful objects of our assistance and refugees as idealised, romantic or exotic clichés. It is a real challenge and I doubt if its even possible to discuss people of refugee or migrant background or the policies and practices affecting them without using some kind of generalizations, legal definitions or framing, but it is important to be self-critical.

At ECRE we try to remember the fundamental truth that people are people, and that regardless of having harsh or traumatic experiences in common there is no universal perspectives, personalities or qualities defining people of refugee or migrant background. When we presented 68 quotes from people arriving as refugees leading up to World Refugee Day we did not select, edit or frame the extremely diverse statements to fit a campaign format or organisational position – we simply presented them. When we cover the refugee- led football club that we sponsor we emphasize their ambition to compete at equal level, not the particular challenges of fleeing conflict. When we invite refugee advocates to communicate through our platforms or at our events we edit or evaluate them as rigidly as we would anyone else. We try to avoid patronizing case stories and universal framing – we try to deal with people. An average walk in almost any neighbourhood in Brussels on any given day will reveal a far more diverse image of people of refugee and migrant background than the Brussels events where they are discussed by institutions, agencies and NGOs, and so of course there is a long way to go- we have simply taken a first step.