Weekly Editorial: Security in Our Homes Does Not Begin at Our Borders! 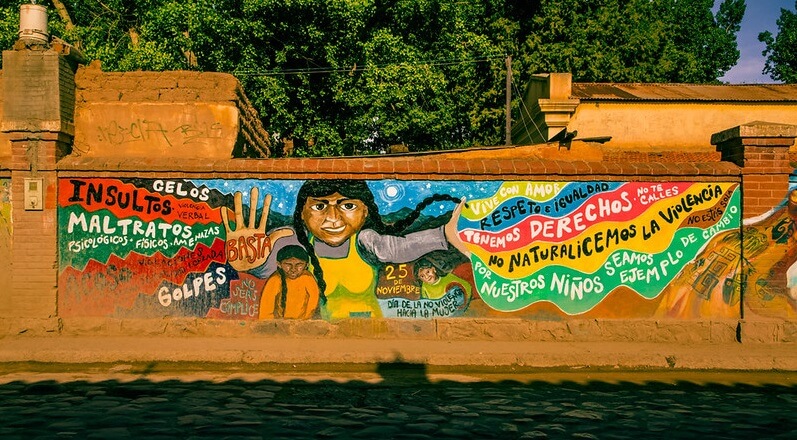 This week saw the International Day for the Elimination of Violence against Women, a reminder that for many women in Europe the greatest threat to their physical security is the man they live with. In France, protestors demanded action and the government scrambled to respond after a report revealed that so far this year 129 women have been killed in domestic violence incidents. Every year, around 3500 people are killed by domestic violence, over 80% women killed by men. That compares to 13 deaths from terrorism in 2018. As well as calls for accession to and ratification of the Istanbul Convention, the most common demand is for more resources for the prevention and punishment of violence against women.

That there is a chronic lack of resources is attested to by all involved. In stark contrast to other perceived security threats, such as migration, where money flows in at national and EU level.

As well as the distorting effect of migration dominating security policy, this trend may even exacerbate security risks. An obsessive focus on migration couched in xenophobic language can lead to radicalisation and to individuals inspired by ISIS or by anti-migration sentiment to engage in acts of violence. (As a side note, emerging research demonstrates a common factor for violent extremists of all stripes is a history of violence against women, generating an additional reason for better understanding and addressing this issue.)

Treating migration as a security threat is often justified by reference to public perception but there are obvious flaws with this argument. First, reacting to perceived security threats rather than actual threats is a problem in itself. Second, public perception of security risks is generated by political discourse – it is no coincidence that in Hungary we find the largest percentage of the population who perceive migration to be a security risk. Third, elsewhere in Europe, where governments are not pumping out (as much) propaganda on this issue, the public does not actually perceive migration as a major security risk. Eurobarometer shows that climate change, organised crime and terrorism rank higher (and terrorism is not a proxy for migration, nor is it tackled by closing borders).

The contrast with violence against women is stark: while denounced by some political leaders, it is still too often treated as normal or as a private matter by authorities at all levels – from local police forces to heads of government.

Recent years have seen a particularly nasty intermingling of gender, security and migration with the use of a gender equality argument to promote divisive anti-migration measures. This includes initiatives to defend European women from predatory “migrants”, promoted by extremist and mainstream regressive forces – forces which themselves contribute to the patriarchal structures that oppress women in the first place. The arguments about banning the Burkha in the interests of women’s rights are similar. Male-dominated institutions legislating or opining on what women should wear is generally not a good route to equality. In addition, for any public authorities seeking to support women’s rights – probably best not to start with clothing. The long list of actions that women are demanding could be a reference point. Top of the list for many would be tackling violence against women, as under discussion this week, from the deadly domestic violence to the near impunity for rape that persists in many European countries.

Can people really believe that migration is our number one security threat? That closing our borders, forcing neighbouring countries to close their borders, buying off dictators in Africa so that they (pretend to) close their borders, leading to suffering, resentment and economic disruption, that all of this is making us safer? That spending hundreds of billions to beat people back at our borders is increasing our security while spending adequately to prevent women being beaten in their own homes is not priority?

Concern about the “securitisation” of migration is valid but must be broad enough to at the same time acknowledge the multiple links that do exist between security and migration. A productive approach lies in taking a more sophisticated (and effective approach) to security policy.

First, it has to consider the security of people in Europe not just the territorial security of states. People face different security threats, depending on the groups to which they belong so disaggregation and devoting resources to tackling threats faced by particular groups is important – be that violence against women or violence against minorities stirred up by xenophobia. Second, an obsessive focus on territorial incursions at borders is a very old-fashioned way to support the security of states. Diverting resources to border closure reduces attention from more important threats, such as infiltration by organised crime, cyber-attacks, environmental disasters and so on. Third, certain political discourse on migration and a narrow focus on preventing it at any cost is itself generating security threats and needs to be checked. Finally, the security of people in other countries is directly related to security in Europe. By pursuing strategies that render people unsafe, such as cooperating with repressive regimes, we will ultimately undermine our own security, and also contribute to displacement; using foreign and security policy to support the human security of people in other regions, not just the security of states narrowly defined, is also crucial.

As we should be reminded this week: refugees crossing borders is not the biggest security threat that Europe faces. Let’s re-focus attention and resources on a broader range of security issues to make all people safer, wherever and whoever they are.