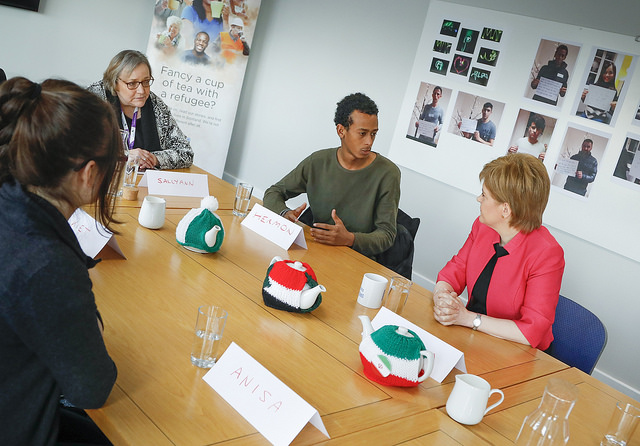 The Scottish Government is considering a change to its electoral system that could give refugees living in Scotland the right to vote.

In a public consultation launched at the end of 2017, the government proposed extending the voting franchise for elections of the Scottish Parliament and local government to include all legal residents of Scotland. The consultation, open until 12 March, comes as a result of the Scotland Act 2016, which granted the Scottish government new powers to manage elections. Currently only British, Commonwealth and EU citizens resident in Scotland and aged 16 or older can vote in Scottish Parliament and local council elections.

While the consultation does not explicitly mention refugees, the external affairs spokesman for Scotland’s Green Party called for the proposed extension to include both refugees and asylum seekers. He argued that this would send a strong message that Scotland is a “welcoming country”. The Scottish Government responded by saying it would “carefully consider” the call to extend voting rights to both groups.

Gary Christie, Head of Policy and Communications at the Scottish Refugee Council, said of the proposals: “People from the refugee community have a lot at stake in the future of Scotland. There is no reason why refugees who are rebuilding their lives here should have fewer rights than the rest of us including the ability to vote in local and national elections.”

The proposal is just one indication of Scotland’s progressive approach to refugee integration, which stands out in the context of UK asylum policy. While asylum rules are a matter reserved to the UK Government and handled by the Home Office, the Scottish Government is responsible for devolved matters, including access to essential services like healthcare and education, which allow for the integration of refugees and asylum seekers.

A new strategy launched this month, the result of a collaboration between the Scottish Government, the council body Cosla and the Scottish Refugee Council, sets out the main goals for refugee integration in Scottish communities over the next four years.

The updated ‘New Scots’ strategy focuses on education, housing, healthcare and employment. Moving away from the strict distinction in UK immigration law between refugees and asylum seekers, it aims to support the integration of new arrivals into Scottish communities from day one, not only after leave to remain has been granted.

“Scotland emerged top amongst European countries polled in 2016 on the question of public confidence in refugees’ successful integration into their new community,” Christie observed. “This was in no small part a result of Scotland’s first New Scots refugee integration strategy. The success of the strategy will be judged by how well we unlock refugees’ potential to make Scotland stronger, more compassionate and more successful as a nation.”

These developments come in the wake of Cosla’s announcement in December 2017 that Scotland had met its target to provide homes for 2,000 Syrian refugees as part of the UK’s Syrian Vulnerable Person Resettlement Programme, three years ahead of schedule. Christie noted that “New Scots’ progressive vision of refugee integration as a two-way process and the model of collaboration between the Scottish Government, local authorities and NGOs also contributed significantly to Scotland’s swift response in resettling 2,000 Syrian refugees across the whole country since September 2015.”

According to Christie, this approach should not be confined to Scotland: “The New Scots approach should be adopted by other parts of the UK. At the same time, Scotland must continue to challenge regressive UK policies that impact on integration, such as its stance on refugee family reunification.”

The UK Government’s general reluctance to improve conditions for refugees was highlighted recently as NGOs criticized the Home Office’s decision to raise subsistence payments for destitute refugees by just 80 pence (€0.91) a week, following three years without an increase.