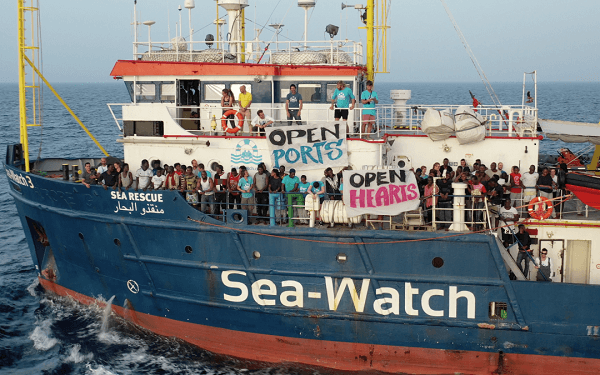 237 people rescued by NGOs at the Central Mediterranean will disembark in Italy after four EU states agreed to relocate them. According to the International Organisation for Migration (IOM) the vast majority of people trying to escape the worsening security situation in Libya by sea is returned to detention camps.

The search and rescue vessels Open Arms, run by the Spanish NGO Proactiva Open Arms, and the Sea Watch 3, run by the German NGO Sea Watch, received permission to disembark a total of 237 people in the Italian ports of Messina and Taranto. In the course of last week. The Open Arms had rescued 119 people in two operations and the Sea Watch 3 rescued a total of 118 people in three operations at the Central Mediterranean. Sea Watch reports that Maltese authorities failed to initiate or delayed rescues on several occasions.

The two vessels had been stranded at sea for several days before being assigned a safe port. According to a statement by the Italian Interior Ministry, Portugal, Ireland, Germany and France agreed to relocate those rescued. Both NGOs operating the vessels are calling for a more systematic distribution mechanism instead of ad-hoc negotiations that leave highly vulnerable people in limbo at sea. Sea Watch tweeted: “We are happy that our guests can finally step on safe land, but there is still a lot that needs to be changed: Shady deals with #Libya, further ad-hoc agreements, #EU-funded #humanrights abuses, this must stop!”

IOM reports that at least 953 people trying to escape Libya by boat have been returned there in the first two weeks of 2020. Most were disembarked in Tripoli and all were taken to detention centres. The increasing number of people departing are driven by “the heaviest clashes Tripoli has seen since hostilities began nine months ago”. While the organisation provides emergency assistance at disembarkation points, the IOM stresses that “measures to protect lives and guarantee the safety of these people are not in place.” The volatile security situation affected road and air traffic and led to a disruption of IOM’s “Voluntary” Return programme. The EU has received repeated criticism for supporting the so-called Libyan Coast Guard, which systematically returns refugees to abusive conditions in detention camps.

The first two weeks of 2020 has already seen 63 recorded deaths of people trying to reach Europe via the Mediterranean.