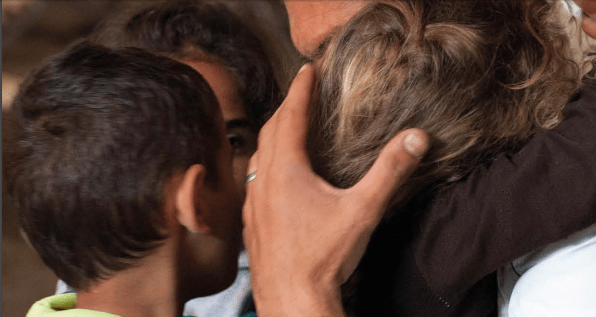 Gloria fled Uganda – where homosexuality is illegal – with her baby in May 2015, hoping to live in freedom in the UK. They initially lived with the child’s father, but he started to demand a sexual relationship so she had to leave.

With nowhere to live while her asylum claim was processed, Gloria applied for emergency support from the Home Office. She was told to go back to live with her daughter’s father and “pretend” not to be a lesbian for a few weeks, until longer term support was arranged.

“In the screening interview the woman said to me: ‘A lesbian? With a baby?’ As if it was not possible or that I was lying. In my country people are forced into marriage and into having children to hide the fact that they are gay. I was afraid to go to my big interview; how would they treat me fairly if this was what they thought about a gay woman having a child?”

After her application for emergency support was rejected, Gloria was forced to beg for money on the street. She asked the Ugandan community for help and had to stay with strangers in crowded conditions. She was unable to breastfeed due to stress and struggled to find money to buy food and milk for herself and her daughter.

Gloria was finally granted emergency support on her third application, after Refugee Action challenged the Home Office’s refusal. She was later given longer term support and now has refugee status.

The report  Slipping through the cracks – How Britain’s asylum system fails the most vulnerable– based on analysis of more than 300 cases – shows some of the most vulnerable people seeking protection are being wrongly denied assistance or are suffering long delays to get the support they’re entitled to.

Our analysis of people in crisis, who like Gloria were in desperate need of a roof over their head and a proper meal, shows that more than half had their application for emergency support refused. But the vast majority (92%) were approved when people challenged the decision, causing huge stress and uncertainty.

Individuals and families at risk of homelessness are waiting an average of nearly two months (58 days) for housing and the small amount of money (just £5.28 a day) they are entitled to for essential living costs, such as food, clothing and transport.

Some wait far longer. One man from Eritrea was left without support for almost 10 months – he was granted refugee status before he was granted asylum support.

These failures by the Home Office to follow its own guidance for supporting those seeking asylum in Britain are making vulnerable people homeless and leaving them unable to feed their families.

Every day our caseworkers see people who have fled conflicts and persecution enduring extreme poverty. Many haven’t eaten a proper meal in weeks and are living on the streets of our towns and cities.

This is despite legislation setting out the Home Office’s duty to prevent people seeking asylum falling into destitution and hardship while their claims are processed, an often-lengthy period when most people have no right to work.

Our research exposes the appalling treatment of families and individuals who have escaped war and persecution abroad, only to be badly let down here in Britain.

The Government must take urgent action to ensure that no-one is left hungry or homeless. People who have lost everything have the right to support and must be able to rebuild their lives with dignity.