Op-ed: The Bamberg model and transit camp system in Germany 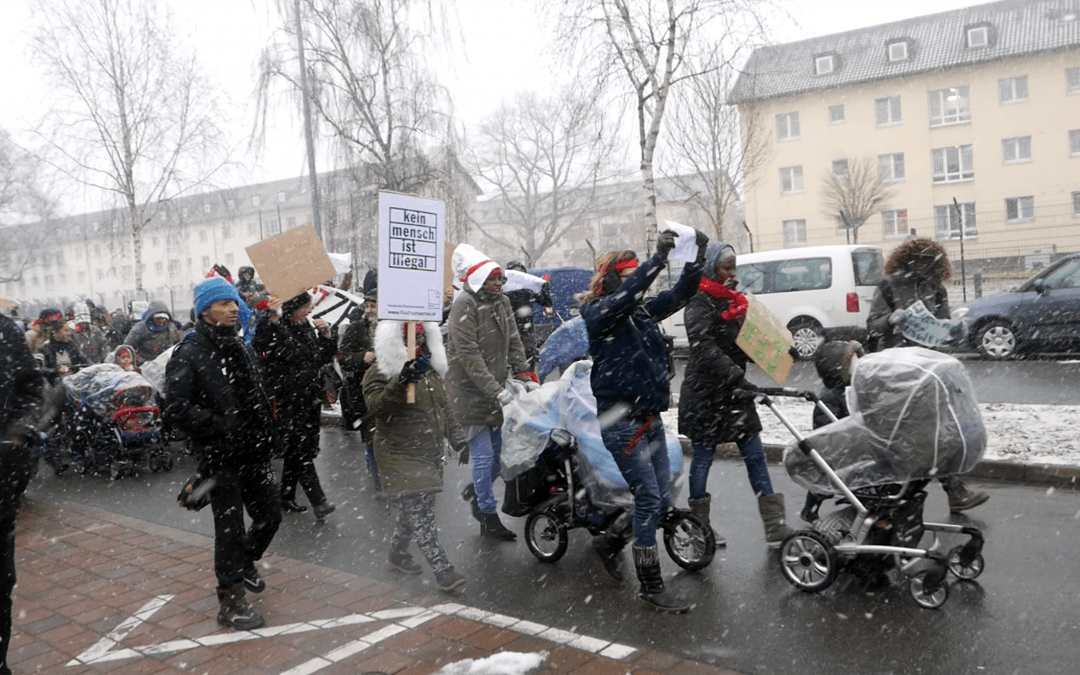 By Aino Korvensyrjä, who is researching German crimmigration law for her PhD, with a focus on legal limbo statuses and punitive practices emerging with the suspension of deportation of third country nationals. She is active in the migration justice group Free Movement Network Finland and in the Berlin-based trial-monitoring group Justizwatch, critically observing racism in the criminal justice system. She is a co-editor of the blog Culture of Deportation.

“We are refugees, not prisoners“, declared the group of asylum seekers living in the AEO Bamberg (Aufnahmeeinrichtung Oberfranken), the largest Bavarian deportation camp, in their press statement of 15 January 2018. Two days later they marched, accompanied by activist groups and people from other camps, from the AEO to the city hall to deliver a list of demands to the lord mayor of Bamberg. This petition and the situation it exposes deserves the wider attention of people in Germany, Europe and even beyond. Bamberg functions as a model of migration management in current German debates.

The AEO is an integrated reception and deportation facility, at present accommodating 1400 asylum seekers and with a total capacity of 3400 in a former US military base, run by the government of Upper Franconia. All relevant authorities are concentrated within the camp: the foreigners’ authority, the refugee administration (BAMF), social office and the administrative court. As the pure transit camps of Ingolstadt/Manching, Deggendorf and Regensburg, the deportation section within the AEO is designed to push asylum seekers whose “prospect to stay“ (Bleibeperspektive) is deemed “poor“ or who have an enforceable deportation order, to leave Germany “voluntarily“.

Just before the Bamberg protest, the major German parties, SPD, CDU and CSU, had published a joint draft for a future coalition government program. The paper included a migration agenda proposing to accommodate all asylum seekers in large processing centres for the whole duration of their procedure, until recognition of their claim or until deportation. These camps were given a new name, ANkER (short for arrival, decision and deportation centres: Ankunft, Entscheidung, Rückführung). [i]

The model of the ‘new’ ANkER camps is the Bavarian deportation or transit camp, in particular the AEO Bamberg as an integrated facility. Bamberg and Manching were established in the fall of 2015 as so-called ARE camps (Ankunfts- und Rückführungseinrichtungen) for the then numerous asylum seekers from West Balkan countries – classified as “safe countries of origin“ to enable routine rejections of their applications. Later also people from Senegal and Ghana –  “safe countries of origin“ since 1993 – were moved there, together with other asylum seekers with a poor „prospect to stay“, such as other West or North Africans, Chechens or Georgians. The latter concept has been in place since 2015, defining some groups as more deportable than others, and strictly segregating people according to their origin. As a rule, only asylum seekers from Syria, Iran, Iraq, Eritrea and Somalia are categorised under „good prospect to stay“.

Whereas the privileged asylum seekers may receive cash, study German, go to school, get legal advice and so on already during their asylum procedure, people with low “prospect to stay“ are denied these rights. While deportations are often prevented by the lack of identity documents or by other hurdles, including the refusal of the individuals to leave, the transit camp is applying an attrition strategy: the living standard of the inhabitants is lowered as much as possible and their sense of isolation from society and aid workers increased, creating a prison-like confinement.[ii]

The 2016 asylum law change  (Asylpaket II) established a legal basis for the “special reception centres“, allowing for accelerated procedures to reject applicants from “safe countries of origin“, or who had submitted a subsequent application, or were deemed as „uncooperative“ in identification and deportation procedures. An earlier change of the asylum law from late 2015 (Asylpaket I) had already introduced a work ban, confinement within city limits (Residenzpflicht) and in-kind benefits instead of cash for the inhabitants of these facilities. Since July 2017 German states are allowed to confine people for up to 24 months in these camps. This has brought back the worst elements of the old German asylum camp system, thought to be superseded in the wake of the nationwide refugee protests in 2012-2014.

The Bamberg protesters denounced their differential treatment: they, including women with small children, are only granted canteen meals and scarce pieces of second hand clothing, no cash payments, no work permit or right to even part-time schooling, health care or permission to leave the city limits. No legal advice is available, even basic legal information concerning their situation is withheld. The camp employees and administration refuse to explain the grounds for their treatment, except the ubiquitous „poor prospect to stay“. The administration refers to federal law to escape responsibility. This is arbitrary treatment at local level framed by federal laws. Indeed, many protesters’ only official document of their stay in Germany is a white paper card issued by the camp.

Another element of the Bamberg model is harassment by the camp security personnel, exercised in impunity, as well as a criminalisation by the police and courts – asylum seekers beaten by the security personnel are routinely transformed into perpetrators when reporting incidents of abuse. Other frequent charges include immigration law violations, unauthorised work, or petty shoplifting. Prison sentences or forced labour are often the outcome for asylum seekers with little chance of defending themselves in court and who cannot pay their fines, as they have no access to cash.

At a moment when the would-be German government is preparing to reform national migration policies and to reassume a dominant position in shaping EU migration policies, it is deeply disturbing that Bamberg is promoted nationally and internationally as a model institution.

Some asylum seekers refer to Bamberg as the “African prison”, drawing a parallel between the German facility and the camps that they have experienced on the African continent in such places as Libya and Agadez, Niger. Despite a difference in severity and character, there are common elements, including arbitrary beatings, criminalisation, forced labour and imprisonment. Furthermore, should an asylum seeker escape from Bamberg to another European country, she or he will most likely be returned through the Dublin regulation and ultimately end up in Bamberg again.

The policies of border externalisation which the EU, lead by Merkel’s Germany, has intensified since the summer of 2015, are complicit in the emergence of an intercontinental camp system. The joint draft of German Social Democrats and Conservatives celebrates these policies in the same section of the draft paper with the Bamberg model. We must oppose these policies with the same urgency whether they manifest in Africa or in the ‘heart of Europe’.

[i] For critical analyses of the proposal, see the commentary of the German NGO Pro Asyl, „Mögliche GroKO: PRO ASYL warnt vor Ausgrenzungsrepublik“.

[ii] For more information on Bavarian transit camps, see the website of the Bavarian Refugee Council.