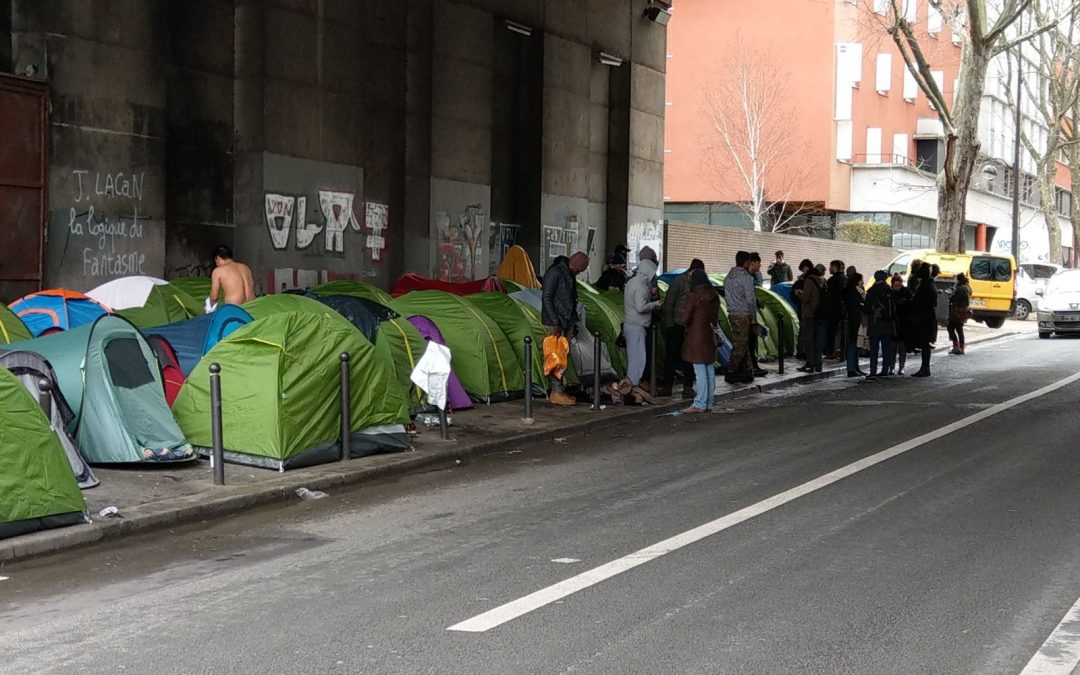 Despite promises from the French President Macron to get people “off the streets, out of the woods” by the end of 2017 and the continued eviction of makeshift settlements, new research by Refugee Rights Europe reveals that the situation remains critical for refugees and displaced people* sleeping rough on the streets of Paris.

While organisations on the ground are working tirelessly to provide basic humanitarian aid to refugees and displaced people , including food and clothing, it appears that the state response continues to leave vulnerable individuals in inhumane and substandard conditions, facing freezing temperatures, inadequate shelter and a striking lack of access to information on European asylum law and immigration rules.

An alarming 86% of our respondents were living in destitution on the streets of Paris – often in tents provided by local NGOs or sleeping under bridges on damp mattresses or the floor. We were shocked by the conditions in which many people were forced to live, with little access to appropriate sanitation facilities, and relying on food distribution points by local organisations and civil society.

A few days after the research was conducted, the weather deteriorated in Paris and tents were covered in several inches of snow. We heard that a number of refugees in the area were allowed into emergency accommodation while snow remained but were then returned to the streets shortly thereafter.

It struck us that many of the respondents we spoke to were suffering from health problems at the time of the study; ranging from mental health concerns to physical ailments and general illness. Some 44% told us that they had experienced a health problem since arriving in France, where 37% thought that these problems were caused by the unhealthy living environment on the streets of Paris.

The majority of those living on the streets do not appear to receive necessary health care. A worrying 54% of respondents said they had not accessed medical care in France, citing issues with their status or language barriers stopping them from receiving medical care. One man told us: “My foot was swollen and it was very painful. When I asked in the hospital they said they cannot help me without my paper. They [told me] to go to a clinic that was over an hour away. I had no money for transport and walking hurt so much so I could not go”.

In Paris, we found that 15% of respondents referred to their health concern as a mental health problem. One Sudanese man explained: “The whole process of asking for asylum here, it is pure stress, all the time. So everyone is going mad. It is not good for your sanity, this uncertainty and conditions. It breaks you”. Another man we spoke to had been taken to a mental health centre where he was diagnosed with paranoia. He told us that he was given pills every day for one month and then told to leave the centre, facing no choice but to return to life on the streets.

The lack of information available to displaced people on the streets of Paris is only likely to compound these mental and physical health concerns. A whole 66% of the individuals we spoke to were lacking access to information about their rights and opportunities, while 67% said they were unable to access information about European immigration and asylum rules. The absence of sufficient information for people in displacement risks leading to refugees being trapped in harmful contexts for longer than necessary, putting people at increased risk of falling into the hands of trafficking rings offering a concrete ‘alternative’. The absence of reliable information moreover encourages the spread of rumours regarding EU asylum rules. It is hence clear that much more must be done to ensure effective dissemination of accessible information in languages and formats understood by the beneficiaries.

Our concerns about the living conditions, healthcare and access to information are especially worrying in light of the large number of unaccompanied children living on the streets of Paris. Unaccompanied children are left at increased risk of developing health conditions and be subjected to exploitation and trafficking. Of the children we spoke to 85% were unaccompanied, while a striking 76% were sleeping on the streets and 46% reported that they were currently suffering from a health problem – the large majority had not received any medical care.

Many of the children we interviewed said they had family in Europe, meaning that they may be eligible for family reunification procedures under the Dublin Regulation. By far the largest number said they had family in the UK. Worryingly, 71% did not have access to information about how to change their situation or information about European immigration and asylum rules. This lack of information is likely to exacerbate the unsafe and uncertain situation in which many currently find themselves, and most likely extends the period of time they are living on the streets of Paris.

Despite the promises made by Macron, it is clear that urgent action must still be taken by the French Government. Recent legislation in the form of the draft asylum and immigration bill will do little to address the material conditions in which many of refugees and displaced people live, instead focusing on increased detention periods and the reduction of the time limit for appeals.

Action is urgently needed to address the current human rights situation for refugees and displaced people in Paris. In the first instance, capacity should be increased and delays in accessing reception centres addressed, so that those in Paris do not have to resort to emergency night shelters or living on the street. In order to uphold the human rights of displaced people in Paris, individuals must be informed about their right to healthcare and how to access it, and be provided with information on the French asylum procedure in a language that they understand.