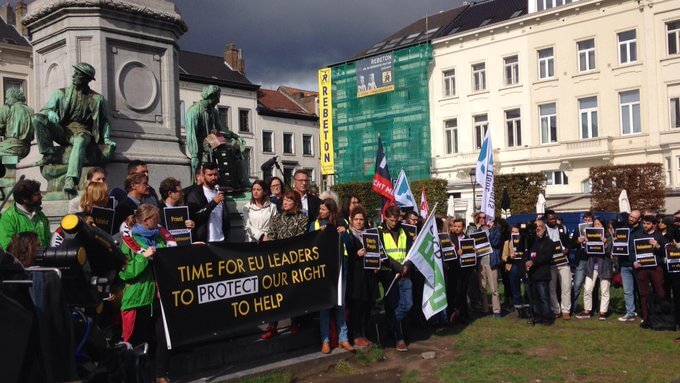 Six years after a shipwreck off Lampedusa cost the lives of 368 people, 2019 sees the death toll of people trying to reach Europe via the Mediterranean climb over 1000. The Malta proposal on disembarkation and relocations will be discussed among EU Member states next week.

According to the Greek coastguard, seven people, including a baby and a toddler drowned in the eastern Aegean Sea. The passengers were trying to reach Greece from Turkey when their boat capsized on Friday near the small Greek island of Oinousses. Twelve people were rescued. The incident is among the deadliest of its kind in Greek waters. Meanwhile, the Albanian Navy rescued 110 migrants in four different operations in the waters between Turkey and Greece in the beginning of this week.

The NGO Alarm Phone, which runs a distress hotline for migrants at the Mediterranean, reports that within the last two weeks of September they were alerted to 19 distress cases in the Aegean region. Seven were intercepted by Turkey, ten made it to Greece and the fate of one boat remains unknown.

Maltese armed forces (AMF) rescued a group of around 40 people from a boat in distress in the Maltese Search and Rescue (SAR) zone. Alarm Phone criticised the Maltese authorities for delaying the rescue as it only occurred 22h hours after they first alerted the authorities to the boat.

According to the UN refugee agency, UNHCR, the Libyan coastguard rescued about 70 Europe-bound people on Sunday after several days in distress in the Mediterranean Sea off the coast of the Misrata. The people were disembarked back in Libya, UNHCR said stressing that they do not consider Libya as a safe place for disembarkation. Alarm Phone had alerted European and Libyan authorities to the boat two days before the rescue took place. A spokesperson of the Libyan coastguard alleged those rescued had been released after failed attempts to move them to a detention centre. According to an anonymous source, the migrants “fled” upon disembarkation.

With up to 40 people feared dead in a shipwreck off the Moroccan coast last week, the number of people who died trying to reach Europe via the Mediterranean in 2019 has climbed over 1000 for the sixth year in a row. This abominable mark is reached at the sixth anniversary of a shipwreck that cost the life of 368 people in 2013.

At a hearing in the European Parliament commemorating the shipwreck, Carola Rackete, captain of the SAR NGO Sea Watch stated: “The EU member states have engaged in a policy of externalisation of their responsibilities and a practice of pushbacks and omissions of rescue, delegating interventions to a country at war, Libya, in breach of international law”. Regarding a proposal discussed in Malta last week, Rackete commented that a temporary relocation agreement with a focus on returning rather than welcoming applicable only to people rescued by NGOs is not a realistic short-term solution.

On October 8th, the proposal for a disembarkation and relocation mechanism will be discussed among EU member states at a meeting of the Justice and Home Affairs Council.