Jordan: Syrian Refugees Deported to Informal Camp at the Border and Fear of a COVID Outbreak in Za’atari and Azraq 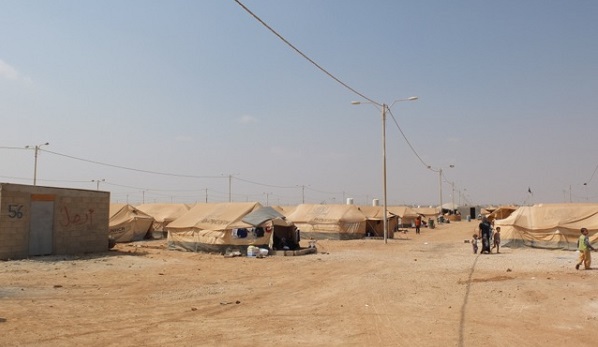 Over the past months, Jordanian authorities have been deporting people with “security issues or other problems” to the informal Rukban camp in the no-man’s land in the desert at the Syrian border. According to Amnesty International, the camp offers harsh conditions and little alternatives than returning to Syria. The refugee camps in Za’atari and Azraq have registered positive Covid-19 cases.

According to a spokesperson of one of the councils that help govern Rukban camp, at least 39 people have been deported to the settlement in the past two and a half months. On 10 August alone, at least 16 Syrians, including eight children aged between four and 14 were forcibly transferred to the site by Jordanian authorities. The Rukban camp is located in an isolated and inhospitable border area known as “the berm” where 70,000 Syrians who fled the war arrived in 2016 to enter Jordan. As of now, 10,000 people live under harsh conditions in the area, facing insufficient access to food, clean water, medical care and sanitation. Reportedly, Aid organisations have not been permitted to access the settlement for a year.

Driven by desperation over these conditions, a family deported to Rukban decided to cross the border and return to government-controlled areas of Syria, despite fears of facing human rights violations. Further, a 21-year old man was forcibly transferred to an area controlled by the Syrian government. Commenting these developments, Amnesty International spokesperson Marie Forestier stated: “Forcibly transferring refugees to a place where they are at risk of serious human rights violations or abuses amounts to refoulement, which is prohibited under international law. Moreover, the fact that these transfers subsequently pushed people to return to Syria, from where they had fled, underscores just how unbearable life is in the berm.”

Humanitarian actors are warning of a potential COVID-19 crisis affecting displaced populations in overcrowded and unsanitary refugee camps and facilities across the Middle East. Jordan has seen a spike in COVID-19 cases including the first six confirmed cases among Syrians living in the two main refugee camps, Za’atari and Azraq. Already on 11 September one refugee and two Jordanian workers tested positive in the Za’atari camp close to the Syrian border hosting 77,000 Syrians within just 5.3 square kilometers. “We are worried about the refugees. We need just to keep the camp very clean, and clear of COVID-19,” said UNHCR representative Mohammed Al-Taher.

Jordan hosts 750,000 registered refugees, including more than 658,000 from the conflict in Syria.