It’s a 2- player- game: Table tennis as a means to integration 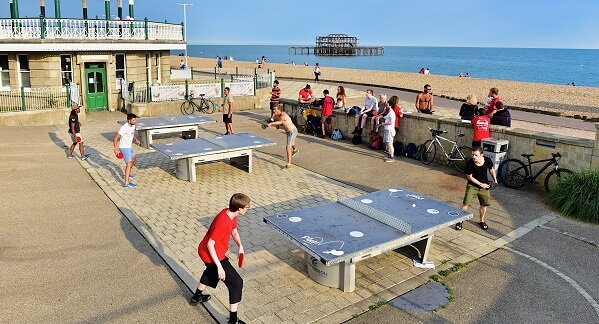 An interview with Tim Holtam, founding director of the Brighton Table Tennis Club

Can you tell us about the history and background of the Brighton Table Tennis Club (BTTC)?

I started the club in 2007 alongside my co-founder Harry McCarney, with just a couple of worn-out tables that we could use for 2 hours on a Friday night at the Brighton Youth Centre. Our hopes were for a club that could give young people who didn’t have the same opportunities as others, the chance not only to try table tennis but to be able to take part in all of the training, competitions tournaments and sportsmanship that come with it.

Myself and Harry both knew that table tennis could be used as a tool to address disadvantage – we’d seen it happen. I grew up in London going to a club called London Progress. There were people there from all over the world that had played at a really high level, some had been national champions, some for 10 years in a row. You could see the benefits that being in this environment had for the kids who attended – so many young people went on to become teachers, doctors – whatever they wanted to be. I’m sure it was because of their involvement with the club. That was my inspiration. Harry and I believe in social justice and equality, and we saw table tennis as a vehicle for these values. We founded the club on principles that have stayed true; ‘solidarity, community, respect and competition’.

With a lot of people and players putting in their time and energy, the club’s success has snow-balled ever since. Since 2015, the BTTC has been based at our own centre with space for 10 tables.

All along the way, we’ve still had the feeling that we’re just at the beginning of the journey.

Who attends the BTTC? Do you have specific programmes for players of different backgrounds?

The club originally focused on engaging local young people from disadvantaged backgrounds. More recently, thanks to many supporters contributing to our outreach and our growing reputation, the club currently offers tailored sessions to a variety of players. We run sessions for adults over 50, women-only sessions, and specific sessions for people affected by cancer, Down’s Syndrome or mental health issues. We have also been able to deliver sessions in schools, colleges, centres for the elderly, prisons, and a psychiatric hospital. We have members from all backgrounds, local people, people from Irish traveller communities, and of course, people with refugee and migrant backgrounds.

We are proud that we can include all these people that might not otherwise have access to the sport, but the idea is that as people get better they can participate in whichever sessions they want to. It’s not about coming here and labelled with some sort of identity, or having to be defined by it- why just because you have a refugee background would you only want to come to a specific session? Here at BTTC you are not a refugee, you are a member of the club.

We identify as table tennis players- so we play table tennis- with everyone. It’s a unique game in that way. The focus should be on engaging and welcoming all kinds of perhaps ‘harder to reach groups’, but making sure we introduce our different players to each other and encourage new friendships. That to me is what a strong community looks like.

You have become the world’s first ‘Club of Sanctuary’- can you tell us more about what this means?

In 2010 we started a programme for looked- after children [children in care of a local authority], with a project called Virtual Schools. Many of the children from the programme have done really well and have found a sort of extended family at the table tennis club.

In January 2015, one social worker referred a 15 year old Vietnamese child to us. He was in foster care and was an unaccompanied asylum seeker. His social worker saw the value in the club and saw how he could benefit from being here. He has since successfully trained to become a coach and has made a brilliant contribution to the club and community.

Then another social worker brought a child from Afghanistan. And he brought all his friends.

It was at that point that we became a ‘Club of Sanctuary’- part of the City of Sanctuary UK project that aims to provide a network of welcoming safe places for people with a refugee or migrant background. There are around 100 cities of sanctuary, and a number of schools of sanctuary, but in 2016 we became the first ever Club of Sanctuary. In the same year we received the Community Integration Award from Migration Works UK.

Around this time we’d also won an ‘Equality Award’ from Table Tennis England. At the reception event for the award we met the chair of Sport England. He was impressed with our work and we saw the potential to collaborate, and since then Sport England have funded us to deliver their flagship refugee integration project. It was quite bold of them!

Now we do a lot more to help our players with refugee and migrant backgrounds than just the sport itself. With the support of Sport England, we piloted a unique method for teaching English through our ‘Pinglish’ programme. ‘Pinglish’ facilitated the creation of a formal curriculum and the training of a specialist coach, and was run in partnership with Brighton and Hove Sixth Form College (BHASVIC). One of the teachers at BHASVIC has told us that her students’ language skills improved twice as quickly since they have started attending ‘Pinglish’ with us. We’re sure that combining an educational curriculum with table tennis meant that those who were not confident in the language could be more motivated to improve because they were also having fun in this relaxed setting.

‘PingMaths’ targets refugee players with lower numeracy skills and it was partially developed with a Brighton and Hove numeracy specialist. But the programme is transferable; we have also successfully delivered PingMaths in three local primary and two local secondary schools as a numeracy intervention for host community pupils with low-level numeracy.

Was it always part of your vision to have a club that reached out to refugees, or did you feel you were responding to a need that was arising in your community?

When we founded the club we didn’t necessarily ‘plan’ as such that we were going to specifically try to welcome refugees. We didn’t see it like this; we set out to help young people, and when we talk about child refugees, aren’t we just talking about more kids that need help? They are just kids, wherever they are from. Lots of the young people who are playing here now don’t want to be labelled as refugees. They want to be identified as table tennis players. We’ve got to make sure we stay true to that.

‘Integration’ can be interpreted in a myriad of ways. Can you tell us more about your efforts towards ‘integration’ as you at the table tennis club understand the term?

Integration is a 2- way process. If you’ve got people that you decide need to integrate into your society, yet that society is hostile and unwelcoming, of course people just aren’t going to want to integrate. If a community is warm people will want to be part of it.

Hasn’t using a local sports club to promote integration got to be a win- win for everyone? We believe table tennis is a universal language; at first players might not be able to communicate with each other in English but you can see through their body language that they are happy, they are smiling, they are welcoming each other, and then over time we’ve seen English levels really improve. It’s nice for people to be somewhere that’s not too formal- to ‘integrate’ in a non-formal sense. Two academic researchers, Elisa Sandri and Mark Doidge, conducted a full analysis of our approach to integration that found some really positive results. We call it an ‘active approach’ because we believe that as coaches and volunteers we have as much of a role to play in ‘integration’ as our attendees- it’s not the sport itself that passively encourages the changes we’ve seen, but the people within it.

Although, saying that, the table tennis gets pretty serious!

We’ve met such strong characters with so much to contribute to our community. They’re survivors and they have made it here, and as soon as they have achieved their level 1 coaching qualification then they themselves have started teaching their skills on to kids in local schools. They’re making such a positive contribution that they can actually take pride in.

Asylum- seeker, refugee, or local player; we all need a purpose. That’s when we notice people really coming into their own- when they find their purpose and somewhere to channel their energy.

Have there been any efforts to transfer the club’s model, and your learning and experience, to other sports clubs?

I’ve been visiting sports clubs that are trying to do progressive work towards welcoming people with refugee and migrant backgrounds. We’re working on the most productive way of sharing our experience and I am sure we can learn from other people as well.

Earlier this year I was involved in a project with The International Table Tennis Federation, who promote solidarity with players all over the world through their ITTF Foundation. They were interested in what we are doing locally and want to increase this sort of project beyond Brighton. The ITTF have trained 36 coaches in the Za’atari refugee camp in Jordan, and have over 40 tables that will be used across the camp so that children have the means to learn to play. There are over 85,000 Syrian refugees living at the camp and 40% of them are under the age of 5. I visited them in preparation for World Table Tennis Day event, and coached some of the young people living there. In the spring we are planning to go to Athens and to Sicily, to see if we can continue to use table tennis to welcome refugees and migrants there.

It’s really crucial for people living in the camps to get away from the monotony of their day. Playing table tennis has great physical benefits especially if space is limited, but it’s also important for people’s mental health; for these few hours the players can stop thinking about the sadness or anxiety or frustration that they might have in their lives. When you play table tennis, whether you are a refugee in Greece, or a refugee in Za’atari, or a refugee in Brighton waiting for your decision from the Home Office, what matters in the very moment is getting that ball over the net.

We’ve been approached by centres, even some in Germany and in Sweden, that have asked us to help them make their clubs into similarly welcoming environments for young people with refugee and migrant backgrounds. The first thing that we believe they need is passion. The purpose of the club has to be authentic. There has to be a lot of love for the sport, and there also has to be some recognition that table tennis has a much greater potential to fulfil. In the end, what we do has both everything and nothing to do with table tennis!

You have seen the club really grow in 10 years- what is your vision for its future?

At the moment we are busy developing an exciting project to increase the impact of our work inside prisons. We’ve had so many successes here, and I am determined that they expand and continue.

However when it comes to our young refugee players, unfortunately I am left to just truly hope that we don’t ever have to see any of our players deported.

You can find out more about the work of the Brighton Table Tennis Club by visiting their website.