Interview: Ready to Rescue – Caught Up in Politics 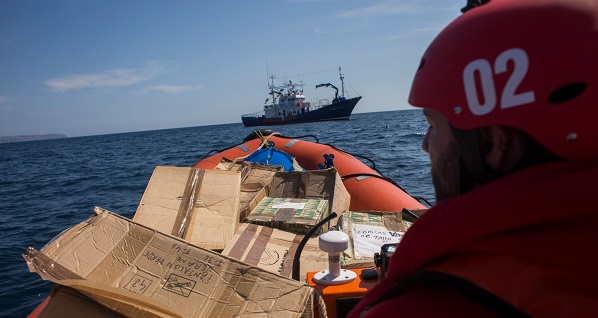 How did Salvamento Marítimo Humanitario get started and what is your motivation?

We are a group of people who said that we cannot bare the shame anymore of what is happening right in front of our eyes. Growing up, we have had positive associations with the Mediterranean – holidays, sun, eating nice and living well – but now it turned into a cemetery and we could not simply continue our life’s and pretend that this is not happening. Our position is that the way the EU is managing the situation in the Mediterranean at the moment is shameful and hypocritical. On our boat we all have specific responsibilities: we have a captain, engineers, a journalist, a nurse and a cook. We all come from different parts of Spain but we have the same objective. Also the sailors are activists. No one is on this boat just to work on a boat – we all share the same ethical and political project.

Your vessel, the Aita Mari, was originally prepared to carry out rescue missions in the Central Mediterranean. What obstacles did you encounter?

Since 2015, our NGO, Salvamento Marítimo Humanitario, has been working on a sanitary project on Chios providing health assistance to new arrivals and at the refugee camp Vial. One and a half years ago we started to prepare the fishing boat Aita Mari to carry out rescue missions. We wanted to go to the Libyan Search & Rescue (SAR) zone because, because if we were to go to the Italian SAR zone we would mainly find the bodies of people who died during their crossing. We were meant to head to the Central Mediterranean in January of this year but the Spanish authorities denied us permission. They said that we needed an agreement with all the states that surround the SAR zone, which means Italy, Tunisia, Egypt, France,….It is important to note that they didn’t use to ask this for a boat to dispatch before. They also say that our vessel was not safe enough to carry out long journeys with shipwrecked people though we have obtained all the necessary certificates from the Ministry for Development to carry up to 120 people.

How did you react when you realized that Spanish authorities would make it impossible for you to carry out your project?

We started looking into different options but while we were sorting out paper work we did not want to stand still, even though the boat was prepared mainly to function as an ambulance at sea. Starting out from Bilboa we went via Coruña to Lisbon and received permission from Portuguese authorities to go to Lesbos and Chios to bring humanitarian aid from Spain by boat. On our way to the Greek islands we passed through the Strait of Gibraltar, when the maritime coordination centre called us and said that we did not have permission to leave Spanish waters. They said we had to request permission from a Spanish port or they would send the Spanish coast guard and we would not be allowed to do anything, despite having permission from the Portuguese port. Legally it did not make any sense but as we did not have a choice we went to the port of Palma de Mallorca. Finally we received permissions to sail to the Greek islands, probably because it was election time and they preferred for us to be far away from Spain. They also sent us a list with possible consequences we would face if we did carry out rescues. The paper said we would have to pay almost 1 million Euros in fines, the captain would risk going to jail, the boat would be blocked, and the rest of the crew would no longer be able to work on the sea.

How do you and other civil rescue organisations ‘navigate’ between politics, law and ethics in these situations?

This last situation is a clear example of criminalisation because the Spanish authorities simply assumed that we were going to do something that we were not allowed to. We might not agree with what is considered ‘legal’ and ‘illegal’ but we would not do anything illegal.

We are not the only vessel prohibited from going to the SAR zones and there are around ten NGOs at the moment in a similar position. From time to time one of them manages to get permission from the courts, like recently the Sea Watch 3, which has left the port of Marseille this week and already rescued 65 people. The Italian vessel Mare Jonio rescued 30 people last week and its crew members, like many others, now face investigation in Lampedusa. We are all very visible in the media and the whole situation is highly politicised, which means that we are trying to beat the politicians at their game and on their homeground. From our point of view, the law is largely instrumentalised by those in power – if it does not fit their interest they bend it and present it in a different way to achieve their aims.

After the series of setbacks and resistance you’ve experienced from the side of Spanish authorities, where do you find the motivation to keep going?

As long as we have the support of the civil society, we’ll keep fighting for migrants’ rights. That is the source of our strength. And the solidarity in Spain and the Basque Country has been growing over the last years: as Spain has become one of the major transit countries in the EU we have seen the development of a growing network of people supporting those who cross it.

European parliamentary elections are taking place next week. Despite the struggle with Spanish authorities and the criminalisation of sea rescue across various EU Member States, have you experienced support from political forces on national or EU level?

At least in Spain we receive support from different political parties from the left and even from the right, from Podemos to the Basque Nationalist Party (PNV). We are confident that the solidarity and struggle for human rights, which already spread from the grassroots to the national level, can also reach the European institutions.

What are your plans for the far and near future?

We have delivered humanitarian donations in Chios and Lesbos. Now the boat is still there and the crew is resting. While the boat will probably stay in Lesbos for at least three months to take care of administrative matters, we are planning to set up the boat as a dental clinic close to the camp Moria. While health care is often provided for children and pregnant women for example, there is hardly any dental health care. We are also thinking about using a machine to produce drinking water for the camp. Though we have various plans under consideration at the moment our primary goal is still to get the permission to go to the SAR zone in the Central Mediterranean.