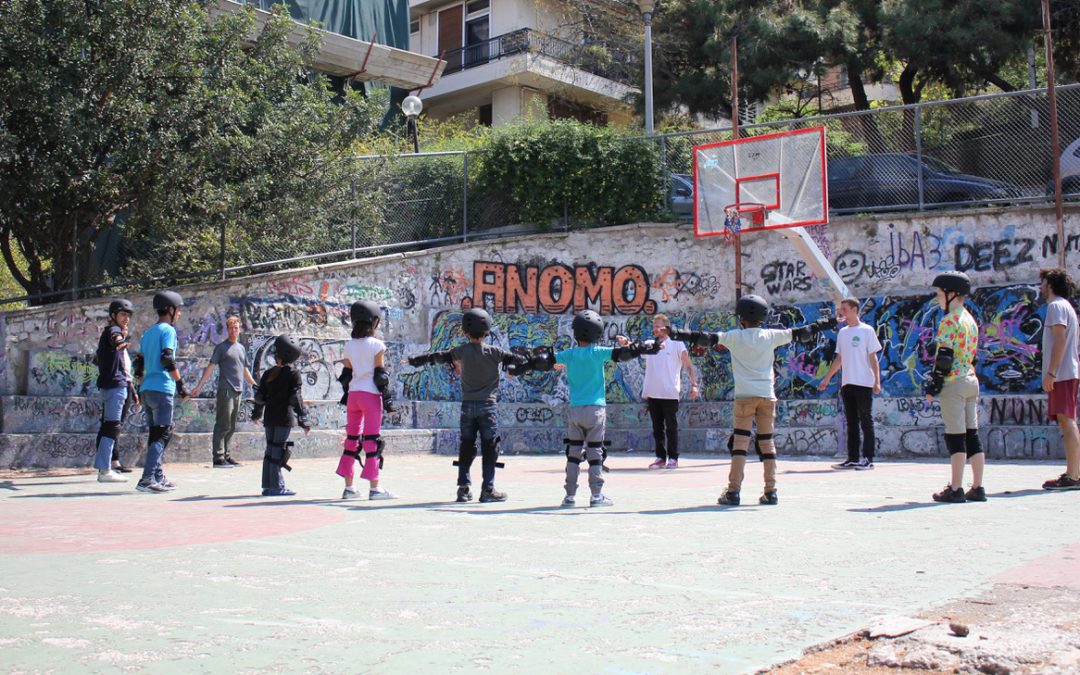 An interview with Will Ascott, co-founder of Free Movement Skateboarding

What is Free Movement and how did it begin?

We are a charity that provides skateboarding lessons on our portable skate park to young refugees and locals in Athens. We teach in community centres, squats and camps. We started almost exactly a year ago. Prior to that I was volunteering with a charity SkatePal, which makes skate parks and run other youth engagement activities in the West Bank. This is where I met Ruby who I run Free Movement with. All these ideas about what skateboarding can do – particularly in places where it doesn’t yet exist were really fresh in my head. It was very inspiring to see what a difference skateboarding was doing for the communities we were working with in the West Bank.

I came straight from there to Athens to volunteer at Khora Community Centre, with ideas of having a mobile skate park and taking it to different camps and communities. I then pitched the project to Help Refugees and they were really supportive. This was in November 2016 and after some fundraising in the UK we were able to launch the project in February/March 2017.

Why and how does skateboarding make a difference to displaced people?

Our three core values are the positive effects on mental health, integration and women’s empowerment.

With mental health, skateboarding requires mindful focus to progress and improve techniques. You’re only going to land a trick if you devote your full concentration. The physical aspect – simply using your body and letting go of your worries also has a clear impact on mental health. We include a yoga warm up to release the students of stress and increase their emotional control. A lot of the refugees have suffered and may still be affected by traumatic experiences so they need to learn to regulate the emotional responses their body is going through. There’s also a mental ease that comes with feeling like you’re a part of a community.

By being part of the skate scene they become part of the local community in a very direct and practical sense. We get local instructors and we encourage local kids to come to the sessions. Kids from other countries get a chance to practice their Greek and English skills.

We have a mixed gender team and we always promote skateboarding as a sport as much for girls as it is for boys. For a lot of these kids this is their first introduction to skateboarding and there’s no preconceptions of a Western male dominated skate scene. So it’s quite empowering for girls from conservative backgrounds who aren’t afraid to engage as it’s just a new hobby for them. Hopefully this empowerment works off the skateboard as well if that confidence is carried on to other areas of their lives.

Who are the target participants of your classes?

We really try and encourage everyone to get involved, as long as you’re 6 and above and someone can sign the disclaimer! We encourage local kids alongside refugee kids to get them to hang out and have some mutual understanding and form friendships.

We focus especially on encouraging women and girls to participate, so we’ve just begun all women’s sessions in a more private space. Whilst younger girls are really keen to get involved, we noticed that beyond the age of around 13, a lot of girls become more self-conscious so these private sessions help them feel more comfortable. This is particularly true for women and girls coming from more conservative cultural backgrounds. Then as their confidence grows some of the girls going to private sessions are now coming to mixed ones. On International Women’s Day this year we had 80% female participation in one of our sessions.

At one camp we worked really hard for a long time to increase female participation, then a lot of new arrivals came and just saw it as a mixed activity and felt comfortable to participate. It initially can be challenging but once you have a solid group of girls it quickly becomes normal and doesn’t need encouragement.

What’s the response been to Free Movement from the local community?

The most direct way we’re involved is through the skate scene. We’re all skateboarders ourselves and have skateboarding friends, it’s the broader community we’re all part of. Everyone’s been really welcoming and supportive and the project seems to have really resonated with the local community. I think people are surprised and proud that this project is happening in Athens. We’ve had a lot of fundraisers put on for us and loads of people have approached us to volunteer.

There are skate communities wherever you go in the world and by introducing refugees to that global network enables them to integrate and find friends wherever they might end up. If they carry that passion for skateboarding on with them and find skateboarders in another city they’ll generally be welcomed with open arms. Recently one boy was relocated and we connected him to a local skate shop. He was instantly given a board and introduced to new friends.

Is there a difference in the sessions you teach in camps, and the inner city sessions?

They’re entirely different. We can’t promote integration in a camp, Greek locals aren’t allowed in. For a lot of those kids it’s just another evening activity which is available – they’re not necessarily devoted skateboarders. Which is fine, they do something they enjoy for an hour a week. Though of course we prefer to try and get kids passionate about it in the longer term. Camps are also very hectic environments, there’s so many young kids around and we can only teach so many at the same time. It takes a lot of energy to maintain a safe space.

But still people in those situations do really value the sessions. For example when we taught in Malakasa camp, which is an hour north of Athens. It’s really isolated and the way the public transport works has changed, so people were unable to access the city as easily. When we came for sessions it was clear people were really happy to see us.

In the city, kids are coming because they really want to be there. A lot of them have access to a skateboard elsewhere and are skating in their own time so you see progression which is great.

What’s the future for Free Movement?

We’re hoping to build Athens’ first indoor skate park. We’re fundraising for that and looking for a space. We’ve been contacted by the Community Collective who are some very reputable skate park builders who have built charitable skate parks before. They’ve built parks in places like Taghazout in Morocco, Palestine, La Paz in Bolivia. They have the materials and the team to build us a park we just need to find the space.

We also try and provide Greek jobs, so we have three Greek skateboarding instructors and we’re working on training modules to provide the best teaching methods and support for the people who participate in our sessions. We’re also starting a youth leadership scheme, to give some of the kids some responsibilities and ownership.

We’re trying to be financially sustainable by pushing our own branded merchandise, hats and skateboards etc. A big part of this is also awareness raising, not just of our cause but to inspire positive skateboarding in different contexts. It’s really easy to get old skateboarding materials off your friends and give them to someone in your local community who will appreciate it. So we’re going to create a little leaflet which will go with all our merchandise to inspire local activism.

We’ve been connecting to a lot of skateboarding charities recently and we’re going to have a forum where we discuss the positive potential of skateboarding. Whilst some charities, such as SkatePal, are more about community building, we’re more focused on trauma informed care and integration. In Palestine the skate park is a concrete structure serving as a community hub. It’s become a cultural centre, there’ll be a theatre built next to it and it’s as much of a community space as a teaching space. Long Live Southbank are also our friends, they voiced the loudest outcry against urban redevelopment in British history. At Free Movement it’s about supporting young individuals who’ve suffered trauma. Which just shows the multiple ways skateboarding can be used to have a positive impact.

I feel like we’re part of a wider mass movement of socially beneficial skateboarding projects and it’s a really exciting development. Skateboarding is quite polarised at the moment as we’re seeing it become more corporatized through sponsorship and advertising. But on the other hand there’s also more socially engaged positive movements as well and I’m very happy to be part of it.