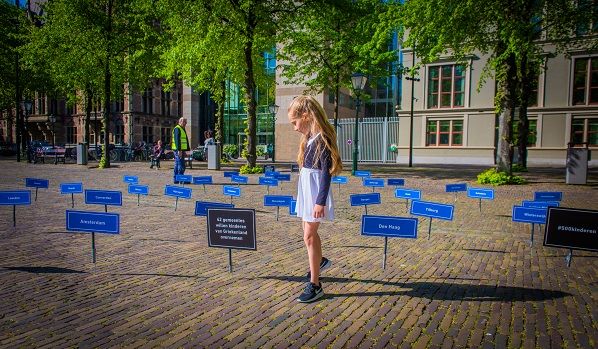 You are currently campaigning to ensure that the Dutch government joins the efforts of 11 other European countries in relocating unaccompanied children from the Greek island camps. The extreme situation in the overcrowded camps are well documented but could you give us a few words on the potential impact of the COVID-19 crisis?

The situation on the islands is a humanitarian disaster. In the Moria camp on Lesbos, there are almost 20,000 people cramped together in a facility build for 3,000. People are waiting for hours in line for food. There is no hot water and one functioning tap for every 1,300 people. With corona, the situation is potentially catastrophic. It is simply impossible to keep distance and wash hands regularly, parents cannot wash their babies and even basic hygiene is impossible to maintain. We have seen countless support initiatives such as the petition SOSmoria (sosmoria.eu) with more than 48,000 people and almost 7,000 European doctors signing up to this urgent call for basic hygiene support and evacuations. We work closely together with the Dutch doctors who started that initiative.

It is difficult to think of an argument not to join a European initiative of solidarity – could you help us understand the position of the Dutch government?

The Dutch government only wants to join the initiative for relocation of the 2,500 unaccompanied minors if all other European countries will do so. But we all know that some countries will keep refusing – Hungary is not going to start showing solidarity on refugee children – so this is clearly not a sustainable attitude. The government also states that this is an ‘ad hoc’ measure and that we need “structural solutions to the ‘refugee crisis’”.  However, the relocation is clearly a structural solution for a humanitarian crisis unfolding in Europe and a most urgent one at that given the situation for the children who are otherwise left alone in the camps.

The Dutch government recently expressed willingness to help Greece to move unaccompanied children from the Greek islands to the mainland, and to assist with the establishment of a guardianship system based on the Dutch model. Although the plan is still unclear, we welcome initiatives addressing the dire humanitarian situation of the refugees in Greece. However, this is no alternative to relocation in the short term. The Netherlands has a well-functioning guardianship program (NIDOS) and capacity to address the protection needs of these children now.

What we need now is direct solidarity with Greece, solidarity between countries, municipalities and actors who are ready to help and most importantly solidarity with the unaccompanied children suffering.

Your campaign is targeting a national audience – what kind of direct support are you seeing and what is your take on the general mood of the Dutch population?

It is great and illustrative of the general mood that 49 municipalities support the call for relocation! These are bigger cities like Amsterdam and Leiden but also small municipalities with combined almost 6 million residents!

We have published a Manifest in a big newspaper with more than 100 sound signatories for our Manifest; among these are prominent (ex)politicians – also from the political parties CDA (Christian democrats) and VVD (liberals) who voted against the relocation. After publication of our manifest, also former European Commissioner Neelie Kroes endorsed our statement and made a clear point in a national radio interview that the Netherlands need to show solidarity in Europe now. She is very well respected and from the liberals, so her support means a lot for our lobby campaign.

On the practical side what is the process and potential – next steps and your hopes regarding political impact and reactions?

As the European Commission has prioritized the protection of unaccompanied children in the Greek refugee camps, we hope that commissioner Johansson, who has the lead in the coordination of this relocation plan, calls upon the Netherlands (and other Member States not -yet- participating) to prioritize the relocation of these children and join this effort of solidarity. We work together with European Politicians and the Greek Council for Refugees to stress the importance of relocation at the European level.

In the Netherlands, we keep up working on our lobby campaign! Support and pressure in the Netherlands is getting stronger every day and municipalities keep joining the coalition of the willing!

Photo: (CC) Daniella van Bergen: A corona-proof action in front of Dutch Parliament, on the blue signs the names of more than 40 municipalities who joined the coalition of the willing (support for relocation of refugee children in the Netherlands).