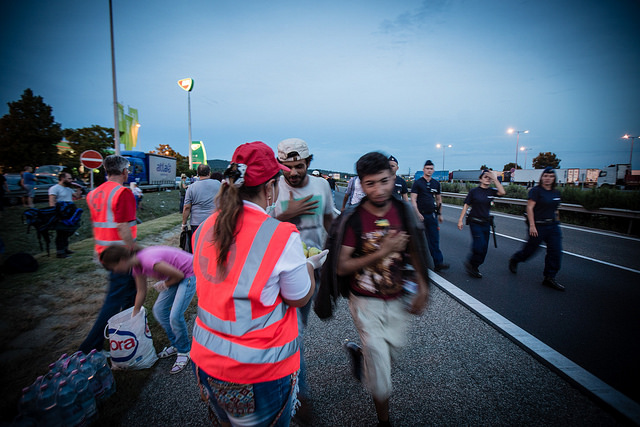 On World Refugee Day, June 20 the Hungarian Parliament adopted bill T/333 a new version of the 2018 Anti-NGO package criminalizing lawyers and activists providing assistance for asylum seekers who could face years of imprisonment. In a statement the Hungarian Helsinki Committee defines the measures as “breaching human rights and EU law” and “undermining the rule of law” but also vows to continue their work and “seize all available legal and advocacy opportunities to challenge this law.” The law package has been met with an international outcry from UN and civil society.

In their statement, ECRE member Hungarian Helsinki Committee outlines the aim of the bill and the Seventh Amendment to the Fundamental Law of Hungary: “The primary aim of this legislation is to intimidate, by means of criminal law, those who fully legitimately assist asylum seekers or foreigners, protecting humanitarian values and the right to a fair procedure. It threatens jail those who support vulnerable people.”

The Hungarian Helsinki Committee states that the adopted bill and amendment breaches human rights and EU law including criteria of legal certainty, freedom of expression and freedom of association. It fails to uphold even the “appearance of the rule of law” by not meeting the request from the Venice Commission, the constitutional expert body under the Council of Europe Parliamentary Assembly Legal Affairs and Human Rights Committee, to await its recommendations. Further, the organisation is appalled by the hindrance of the right to turn to court and the attack “on one of the last lines of defence of the rule of law.”

The Hungarian Helsinki Committee promises to “seize all available legal and advocacy opportunities to challenge this law that breaches fundamental rights and EU law, provide “legal expertise and, to the extent of our capacities, free defense counsel to anyone against whom a criminal procedure is initiated” and “continue to provide legitimate and free-of-charge legal assistance to asylum-seekers who seek our assistance and who have applied for asylum with the Hungarian Office of Immigration and Asylum.”

The adoption of the bill reflects the broader political programme of newly re-elected Prime Minister Viktor Orban and the Fidesz party he heads, described with the following words by ECRE Secretary General Catherine Woollard: “The Hungarian elections produced the depressing return of Viktor Orbán and with him the increased threat to civil society, individual activists, the rule of law in Hungary, and to the EU itself.”