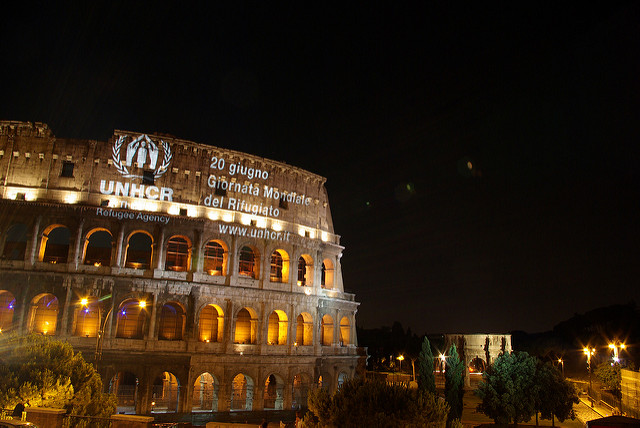 On 14 February, the UN Refugee Agency (UNHCR) implemented the second evacuation to Italy, bringing the total number of highly vulnerable refugees directly evacuated to Italy to 312. Additionally, more than 1000 refugees have arrived in Italy since February 2016 using a humanitarian corridor based on a Memorandum of Understanding (MoU) initiated by an ecumenical church initiative.

“To avoid human trafficking, avoid deaths at sea, and show that it is possible to utilise other channels of entry other than the pontoons of death,”  the Community of Sant’Egidio the federation of the Evangelical Churches and the Waldesian Church entered into a MoU with the Italian government creating a self-founded humanitarian corridor to Italy at the end of 2015. The pilot project facilitates the legal entry to Italian territory with humanitarian visa and opens the possibility of applying for asylum. So far, partner countries are Lebanon, Morocco and Ethiopia. Acting through the Italian branch of Caritas and Fondazione Migrantes – and the Community of Sant’Egidio reception requirements are ensured. Welcomed into private houses beneficiaries receive Italian lessons, legal aid and schooling.

Italy is the first country receiving refugees directly from Libya under the Emergency Transit Mechanism by UNHCR. In the last three months, two evacuations have taken place.  312 individuals arrived by way of entry visas and ad hoc flights in Italy. They are to be distributed to different locations across the country and enrolled into different reception programs, inter alia provided by the Episcopal Conference of Italy through Caritas.

“These evacuations are the best example of the impact that international solidarity can have on refugees themselves; however, much more needs to be done. Only 16,940 resettlement places have been received so far for the 15 priority countries of asylum along the Central Mediterranean route, including Libya and Niger. We call on all countries to come forth with additional places that will provide a tangible solution for many more refugees who are still in Libya,” said Vincent Cochetel, UNHCR’s special Envoy for the Central Mediterranean.