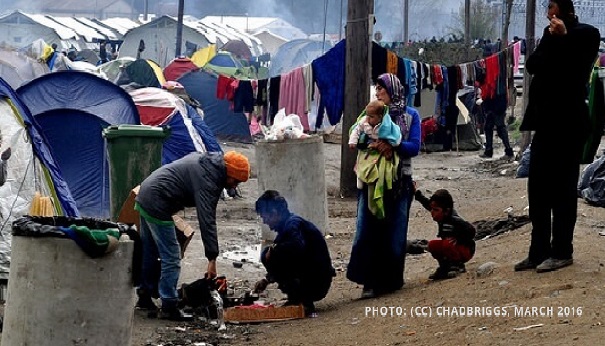 The Greek government has announced an extension of the lock-down of 120,000 people in camps on the islands and the mainland. Human Rights Watch (HRW) expresses concern over a large number of unaccompanied children remaining detained in police stations and pre-removal centers. UNHCR and NGOs criticise significant cuts in housing resulting in less safe living places for vulnerable groups. As a result of a new registration process introducing further red tape for NGOs working in Greek migrant camps, 22 organisations will asked to cease operations.

Just hours after a 2000 people strong protest in Athens against the mistreatment of asylum seekers on World Refugee Day June 20, the Greek government announced a two-week extension of its Corona related lockdown of overcrowded and unsanitary camps on the islands and the mainland. Despite no Corona related deaths in the camps and just a few dozen cases the lockdown that has been in place since March 21 continues while restrictions on the rest of the country has been gradually lifted.

In a letter to Greek prime minister Kyriakos Mitsotakis, HRW states that despite the reduction from 45 to 25 days of the maximum period of detention for unaccompanied children, Greece continues to violate international human rights law by using “protective custody” in police stations and pre-removal detention centres across Greece. The organisation states that on April 30, 276 children were detained and urges: “Their release from abusive detention conditions would also better protect them from the risk of Covid-19 infection”.

With the reduced deadline to leave reception facilities from six months to just 30 days  and the closure of 60 of 93 hospitality facilities for asylum seekers on the mainland already potentially leaving thousands of people with little alternatives to sleeping rough, the Greek government has decided to cut the ESTIA II housing program by up to 30%. UNHCR Greece stated: “This represents a significant reduction in funding which may have an impact on both the quality of services provided and the ability of partners to respond to the prescribed requirements.”

NGOs certified in the old Register of the Ministry of Interior had a deadline until June 14 to submit an application for registration in the new Register of Greek and Foreign Non-Governmental Organizations under the Ministry of Immigration and Asylum. 18 organisations have permission to continue their work in the camps, while 22 organisations will have to suspend operations awaiting a final decision of registration of the Special Secretary for Coordination of Bodies. The new registration is presented by the government as part of an effort of tightening what it refers to as “opaque” rules of oversight and establish transparency of NGO operations. Migration and Asylum Minister Notis Mitarachi has complained that out of 1.5 billion euros in EU support funds for Greek migration projects between 2015 and 2019, the Greek state managed just 1.9 percent, stating to Parliament last month: “Do you want to hand over the keys to NGOs? I don’t want that”. However, NGOs worry that it will in fact hamper the independent oversight of the Greek government provided by civil society: “It is often support groups that highlight alleged abuses by coastguards or police and take legal action against the Greek state on behalf of asylum seekers,” stated Minos Mouzourakis, legal officer for Refugee Support Aegean (RSA), and continued: “The ministry evaluates independent organisations that often criticise it… it should not have such (powers)… it’s a question of impartiality.”

Following calls for the Greek government to investigate push-backs at sea and land borders with Turkey, mounting evidence and a steady stream of reports of new incidents yet more push-back have been reported on June 22 by local media. The Greek Coast Guard reportedly pushed back a group of 29 people into Turkish waters. The group was rescued by the Turkish Coast Guard after floating adrift for over 10 hours. The NGO AlarmPhone alerted both the Greek and Turkish Coast Guards to the distress case many hours prior to the rescue. On Thursday, Alarm Phone called on relevant authorities to rescue another 30 people in distress in Greek waters but then lost contact to the boat.