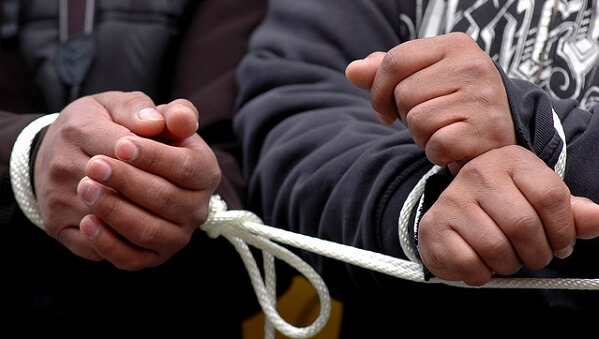 The German government has responded to a parliamentary inquiry filed by MPs from Die Linke -the German left party- concerning new reports on the use of police violence in collective deportation procedures. While providing data on the means of physical restraint in deportation procedures in 2018, the government conducted no further investigations on the alleged human rights violations.

The inquiry referred to three particular instances of deportations implementing the Dublin III regulation between June and November 2018. The refugee councils of Berlin and Lower Saxony provided testimonies that document police brutality, physical restraints, separation of families, humiliating treatment and the use of sedative medication. In its response, the government provides data showing that in 2018 – until November – on 157 deportation flights people were physically restrained 300 times. Deportations to Italy, Tunisia and Afghanistan show particularly frequent use of physical restraints. The government states that the responsible authorities have not filed a report on the cited incidences and offers no further investigations.

The MPs that initiated the inquiry emphasize that they oppose the use of deportations, but as long as deportations continue to take place, they demand that deportations from Germany should avoid the use of violence, separation of family, deportation of pregnant women and other humiliating treatment by all means. The inquiry suggests there is a link between the reported toughening of deportation procedures and the political demand for more effective implementation of deportations, which has found expression in decrees on national and federal level over the last two years, they say. The government denies such a trend and stresses that the use of lawful coercive measures is subject to the expediency of individual cases.

Ulla Jelpke, one of the MPs who filed the inquiry, expressed her disappointment that the government does not see the need for further investigations of the reported human rights violations during deportations. According to Jelpke, the government’s inaction signals that it readily neglects the rights of asylum seekers when it comes to removing them from the country.