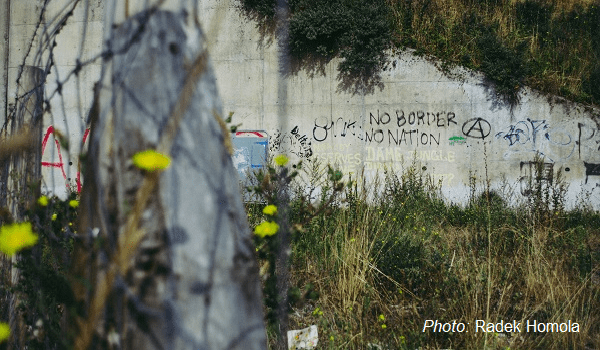 The French police have denied firing shots while attempting to turn a group of migrants back into Italy. Earlier last week, Italian authorities evicted migrants from a house in the border town of Oulx and charged activists for occupying private property. A judge has rejected the application to evacuate a migrant camp in Calais and the Court of Cassation has definitively acquitted the activist, Cédric Herrou. In Paris, almost 500 migrants were given shelter after occupying Place de la République last week.

Last Friday night, a group of migrants travelled from Oulx to Claviere in Italy and attempted to cross the border into Montgenèvre, France through the forest mountain trail. The border police of Montgenèvre stopped and returned the group to the Italian border after contacting Italian police. A ten year old Afghan girl who was among those returned arrived visibly shaken at a volunteer-run refuge in Oulx and was subsequently hospitalised for psychogenic shock at the Regina Margherita hospital in Turin. The girl’s mother explained that  shots fired by French police had retraumatised her daughter, who had previously sustained a head injury at the age of seven from a bomb explosion in Afghanistan. The reports of shots being fired to frighten the migrants attempting to cross the border have been denied by both the French police and the Prefect of the Hautes-Alpes.

The young girl and her family had been part of the group of 50 migrants who were evicted from an occupied building in Oulx last week. The former roadhouse was occupied by activists and turned into a shelter for migrants attempting to cross the border to France through mountain trails. The shelter was part of a campaign called “Briser les frontières” (breaking borders) promoted by a group of activists against French immigration policies and alleged pushbacks. The migrants were taken to hosting facilities in Oulx, Susa and Bardonecchia. Thirteen activists were at the site when the police raided the building and were subsequently charged with “invading buildings.” This follows the indictment of eighteen activists last week by the Turin magistrates for violating private property and occupying the shelter in Oulx.

In France, Cédric Herrou, a farmer who was prosecuted for assisting the entry, movement and stay of migrants was acquitted this week in a final judicial victory at the Court of Cassation. The Court declared the appeal lodged by the general prosecutor’s office, inadmissible. The decision marks the end of a long legal battle concerning the “offense of solidarity”. The legal proceedings consisted of a referral to the Constitutional Council in 2018 which subsequently enshrined into law, the principle of fraternity and freedom to help others, for humanitarian purposes, regardless of the regularity of their stay on the national territory.

In Calais, a judge has rejected the request for the closure of a camp where approximately 200, mainly Eritrean nationals were residing. The judge stated that the petition for interim relief  lodged by the town hall of Calais was not justified in urgency, nor in threat to health or public safety. It was reported that the new judge “took time to study the situation” of the BMX camp, which the organisations La Cabane Juridique and Utopia 56 submit “is made up of tents in good condition, spaced and set up in an orderly manner”. Human Rights Observers, an organisation in Calais counted approximately a thousand evacuations in 2020.

On 25 March, 480 homeless migrants were granted shelter after occupying Place de la République in the heart of Paris for several hours. The action, supported by several organisations including Utopia 56, took place during “Nuit de la Solidarité,” an annual event to support the homeless. Yann Manzi, the founder of Utopia 56 told InfoMigrants “Our job is also to help make these people and their situation visible.” After several hours of negotiations with the authorities, the supporting organisations obtained shelter for all of the migrants present who were put on buses and directed to hotels or gymnasiums. Manzi, stated that “This occupation proves that things can be organized without violence” referring to a similar protest which was broken up by police using force last November.