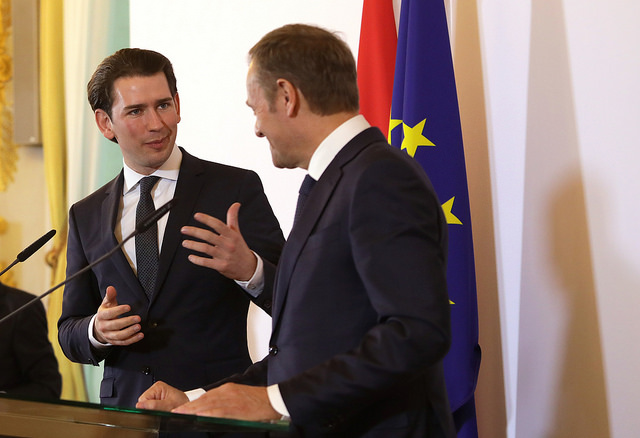 Up until 2015 or so, Austria was quite a favourite of NGOs in Brussels: an EU Member State willing to promote human rights in EU internal and external policies and happy to support civil society, both generally and in its provision of input into EU policy-making. It consistently followed a collective European approach. Although it didn’t punch above its weight to the same degree as the other 1995 entrants, Sweden and Finland, like them it was viewed as a positive force.

All this is past tense at the start of Austria’s EU Presidency. For many, the Presidency evokes fear and foreboding, multiplied because it is shared by officials across the EU Institutions. Concerns centre on a set of inter-related issues: the Austrian Government’s stance on asylum and migration; its closeness to the demagogic leaders of certain countries; its underlying anti-EU stance; its courtship with Russia. The country’s ability to play the role of the Presidency is questioned because its obsessive and biased approach to migration and its love-in with the extremists may preclude the neutrality required.

On asylum and migration, the toxic policies coming out of Vienna are well known. The Presidency’s vanguard has been pitching their “FEPS” non-paper in Brussels for 18 months, and further ideas on externalization were introduced at the JHA Council in June and at the COSI meeting this week. With the stated objective of zero asylum applications in the EU, their proposals read like a Greatest Hits of externalization: external processing of asylum applications (the golden ticket – willing hosts still sought); camps in the Balkans (copyright T Blair 2003); detention camps at the EU’s borders (as piloted by Viktor Orban, a truly reputable role model). Many of these measures remain in Externalization Fantasyland because they depend on the cooperation of non-European countries which unsurprisingly have little interest in helping openly racist European governments pursue their attempts to end migration. There are two areas to watch where more significant damage could be done: the Balkans and internal EU policies.

In the Western Balkans, the accession process is a powerful motivator, the prize of eventual membership of the EU and the acknowledgements of progress along the way – positive country reports, the opening of chapters, security cooperation, visa liberalization – are all politically and economically significant enough to get Association and Candidate countries to cooperate, whereas without the Accession carrot other incentives have frequently proven inadequate when it comes to buying support. Also, unlike in other regions, Austria has the presence and knowledge to exert an influence, as seen with its facilitation of the agreement of February 2016 which led to the closure of the Balkans route.

The Accession process is an example – or the example – of the EU using positive conditionality and incentives to support positive change. Working with reformers in institutions and civil society, the EU contributed to rapid democratic change in the 1990s and 2000s. If, rather than positive changes, countries are now to be rewarded for migration control in processes negotiated outside the Accession framework, then the process will hardly have the same positive transformative effect. Its potential is already reduced by the simple fact that the EU to which countries are acceding is one less respectful of human rights and democracy.

As a side note, while Accession conditionality supports changes pre-Accession, its long-term impact is now in question given the gradual but severe reversals in standards of democracy and respect for the rule of law over the last ten years in certain countries. Neither Hungary nor Poland would meet the Copenhagen Criteria for membership now: the warnings of the risks arising from the fact that the conditions imposed on candidates were higher than those expected of members (for instance on anti-corruption or minority rights) have proven prescient. This calls for rapid introduction and enforcement of stronger standards to apply to members.

The second area where the Austrians could do significant damage is on the inclusion in Europe of refugees. Legal and policy proposals at national level and the rhetoric used in speeches and in EU meetings demonstrate plans to create a hostile environment and deter the arrival and settling of refugees (and other third country nationals of course). A proposal such as doubling the time it takes to acquire citizenship to 10 years is a cruel measure that serves no useful purpose. It will keep people in a situation of limbo, with the label of “refugee” now a derogatory term in some places. Both the narrative – full of stereotypes, misuse of statistics, racist tropes and Islamophobia – and the restrictive measures are common to the anti-migration elements in the governments of Poland, Hungary, Italy, Germany (in the CSU), as well as Austria. Their starting point is that “integration has failed” or is “impossible”. That Europe needs to return to being a homogenous, white Christian place (which of course… it never was).

The measures proposed strip people of the rights that are essential to full inclusion in European societies. This can be a self-fulfilling prophecy: you remove the right to work and then complain that people are dependent on social assistance; or more subtly insist on regular review of their status and institute return to threaten their residency rights, thus making them unappealing to employers and complain that they are not working. The social tension that can arise will in the short term benefit the parties living off the fear of others.

How the Presidency will push this at EU level is not yet clear. It may have to reluctantly continue with the CEAS reform process and there are many elements there that reduce inclusion prospects (although more foresighted Member States have removed some of them during the negotiations). The other area to watch is the next EU budget, the Multiannual Financial Framework (MFF -2021-2027), now under discussion. In the absence of legal competence, the EU main influence on inclusion (aside from the legal framework on asylum) is through funding. The other EU Member States and the Institutions must be ready to resist Austrian efforts to undermine the use of funding to support integration.

An advantage in all of this is that the EU Presidency is not what it used to be. Rather than the previous lead role in driving the EU agenda, since the Lisbon Treaty changed the role of the six-month Presidency it has evolved to become a “supporting Presidency”. There is a stronger role for the “services”, the European Commission and the European External Action Service, in chairing the preparatory meetings of Member State representatives, in setting the agenda, and in developing and presenting policy. Since 2009, most Member States taking their turn at the Presidency have played a facilitating role, guiding the Council to agreement. Each has tended to select one issue that they want to highlight, squeezing it into the agenda and perhaps hosting a conference on the topic.

There is no doubt that Austria’s issue is migration. They also talk about security but only insofar as it is linked to migration. Any serious tackling of security threats or building EU security policy would have to go beyond an obsession with preventing people crossing borders. Whether the Austrian government has the capability or the neutrality to play the honest broker and keep Council business running is an open question. The outgoing Bulgarian Presidency largely managed this, as did other recent Presidencies. Despite the lack of agreement on the reform of the CEAS, they did not impose their own agenda on the EU as a whole or in the asylum debate (although the Slovak Presidency’s pursuit of “flexible solidarity” came close).

Underlying all of this are the real issues that should concern even those who secretly or less secretly agree with the Austrian government on migration. First, this is no longer about migration: Austria and its allies are promoting an anti-EU agenda, ready to instrumentalize migration but as interested in undermining the collective European political and legal order, like all extreme-nationalists. Second, the lesson to be drawn from Austria – as from Hungary – is that, while the threat from extremist-nationalists like the Freedom Party is clear (and long-established – they have been in the government before, after all), the anti-migration, anti-Europe agenda becomes far more powerful through the conversion of mainstream leaders and parties to the cause, along with their subsequent complicity in allowing institutional and political capture by the migration obsession of the bad company they decide to keep.