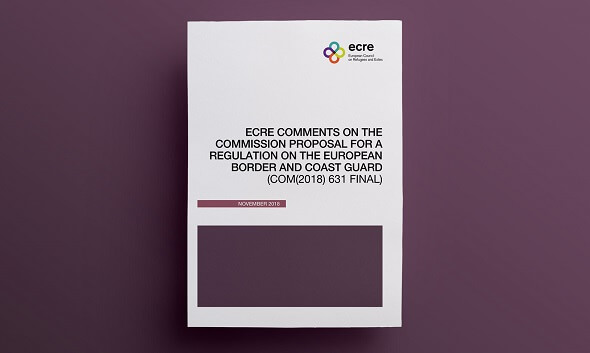 ECRE has published its comments on the European Commission’s proposal to revise the European Border and Coast Guard Agency (EBCG) mandate. The Commission proposal of September 12, 2018 repeals the mandate and replaces it in its entirety with a new text. ECRE’s comments provide an analysis of the proposal as well as a number of key observations and recommendations to the Commission.

While the proposed changes to the EBCG mandate are significant, they do not fundamentally overhaul the core functions of the Agency but expands its tasks, competencies, budget and technical resources to unprecedented levels; a proposed massive budget increase to 12 billion euros (up from 5.5 million in 2004) and the creation of a standing corps of 10.000 European borders guards by 2020.

The Commission sees a pivotal role of the EBCG Agency to be to increase the numbers of migrants effectively removed from EU territory, for which it proposes to bolster its powers and resources to coordinate and initiate return operations and seek the cooperation of third countries. Meanwhile the proposal on the European Union Asylum Agency (EU AA) sets out that both agencies should cooperate by way of the deployment of migration management support teams at hotspots and controlled centres.

The proposals are presented only eight months before the European elections in May 2019 which, given the highly controversial nature of the legislation, provides very little time for the European Parliament and Council to adopt their respective positions and conclude inter-institutional discussions appropriately. Moreover, the presentation of ambitious proposals on the Agencies and the Return Directive, in conjunction with a reduction of procedural safeguards in return processes, indicates a major shift of priority from the asylum package to border management and return. At a time when the number of migrants arriving irregularly over sea or land in the EU has substantially decreased compared to previous years, the expansion of the EBCG Agency’s mandate would seem to perpetuate a crisis mode approach contrary to the realities on the ground.

ECRE’s comments and recommendations concentrate on key provisions in the Commission proposal which raise concerns from a fundamental rights perspective. These include the potential accountability gaps resulting from the far-reaching executive powers Agency statutory staff can be entrusted with under the proposal, the extended mandate in the area of return and cooperation with third countries. The provision reintroducing “mixed return operations” – return operations to be carried out by the Agency from the territory of a third country to another third country – is extremely problematic in this regard.  Unable to verify whether return and return decisions taken by the third country concerned comply with human rights, the Agency and participating Member States would assist in returning persons on the assumption that national procedures in the third country concerned respect the fundamental rights of returnees in practice. For this reason, the European Parliament had successfully opposed the inclusion of such provision in the existing EBCG Agency Regulation adopted in 2016. Furthermore, the paper argues that the opportunity should be taken to strengthen the independence and resources of the Fundamental Rights Officer in light of the boosted operational capacity of the Agency while further changes enhancing the accessibility and effectiveness of the individual complaints mechanism are called for.  Finally, ECRE’s comments also look at the potential data protection risks resulting from the proposed extended powers for the Agency to process operational and personal data relating to third country nationals. The EP rapporteur’s draft report on the Commission proposal will be discussed in the LIBE Committee on Monday 26 November.