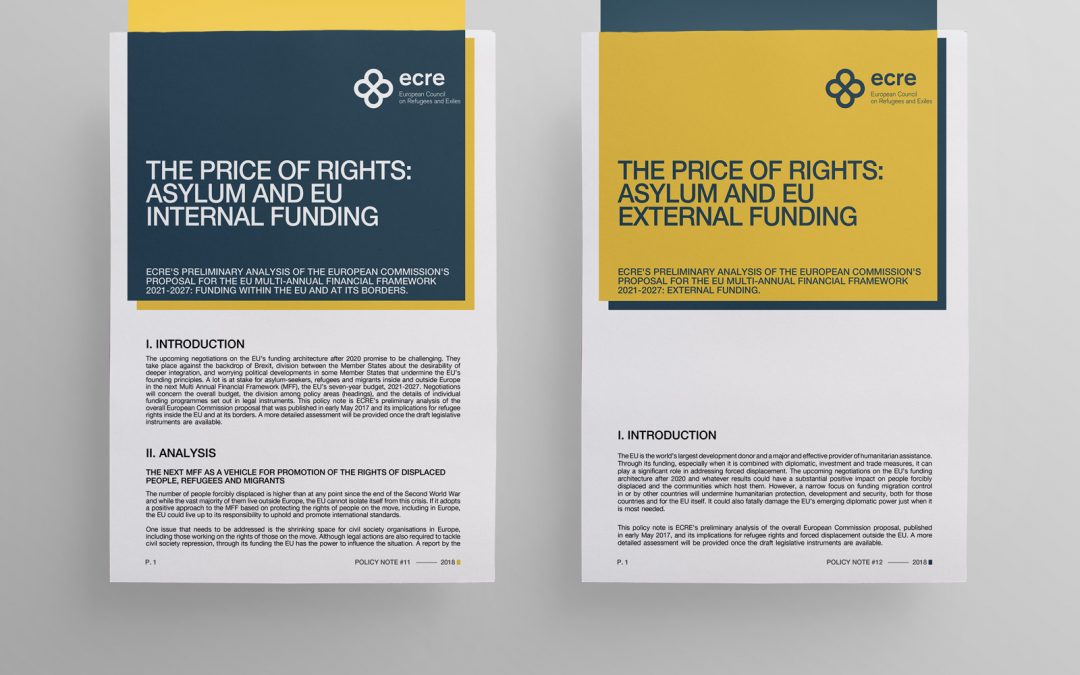 ECRE has published Preliminary Analysis of the European Commission’s Proposal for the EU Multi-Annual Financial Framework 2021-2027 in two Policy Notes focusing on Asylum and EU External Funding and Asylum and EU Internal Funding including targeted recommendations to EU institutions, Agencies and Member States.

The upcoming negotiations on the EU’s funding architecture after 2020 promise to be challenging. They take place against the backdrop of Brexit, division between the Member States about the desirability of deeper integration, and worrying political developments in some Member States that undermine the EU’s founding principles. A lot is at stake for asylum-seekers, refugees and migrants inside and outside Europe in the next Multi Annual Financial Framework (MFF), the EU’s seven-year budget, 2021-2027. Negotiations will concern the overall budget, the division among policy areas, and the details of individual funding programmes set out in legal instruments.

The number of people forcibly displaced is higher than at any point since the end of the Second World War and while the vast majority of them live outside Europe, the EU cannot isolate itself from this crisis. If it adopts a positive approach to the MFF based on protecting the rights of people on the move, including in Europe, the EU could live up to its responsibility to uphold and promote international standards.

The EU is the world’s largest development donor and a major and effective provider of humanitarian assistance. Through its funding, especially when it is combined with diplomatic, investment and trade measures, it can play a significant role in addressing forced displacement. The upcoming negotiations on the EU’s funding architecture after 2020 and whatever results could have a substantial positive impact on people forcibly displaced and the communities which host them. However, a narrow focus on funding migration control in or by other countries will undermine humanitarian protection, development and security, both for those countries and for the EU itself. It could also fatally damage the EU’s emerging diplomatic power just when it is most needed.

The policy notes contain ECRE’s preliminary analysis of the overall European Commission proposal, published in early May 2017 and a more detailed assessments will be provided once the draft legislative instruments are available.