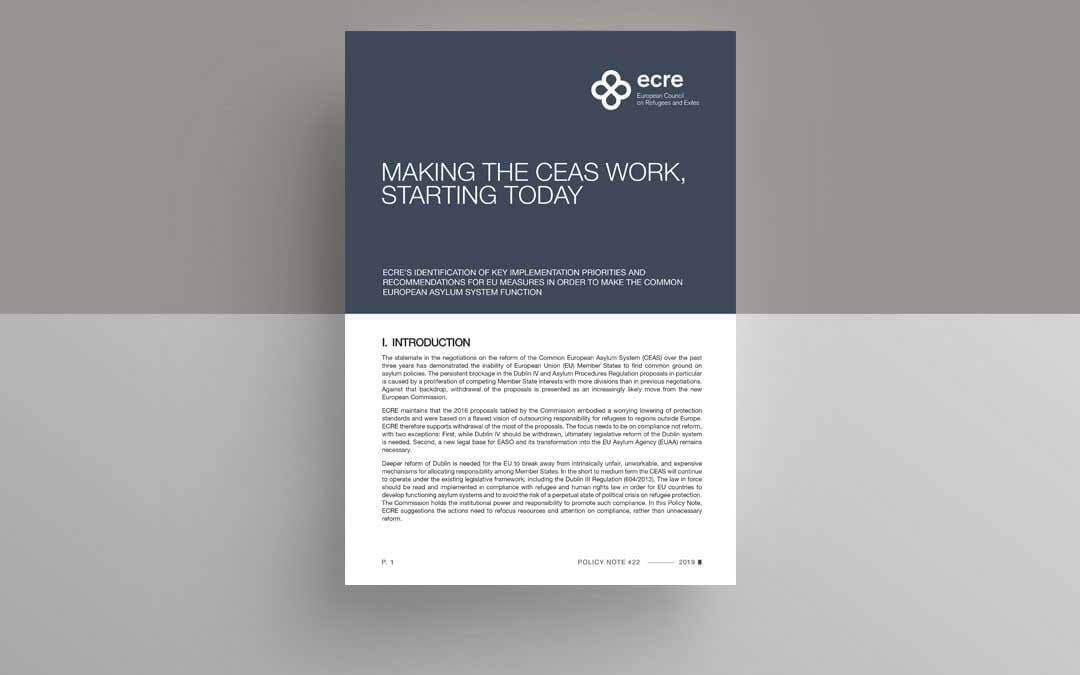 The stalemate in the negotiations on the reform of the Common European Asylum System (CEAS) over the past three years has demonstrated the inability of European Union (EU) Member States to find common ground on asylum policies. The persistent blockage in the Dublin IV and Asylum Procedures Regulation proposals in particular is caused by a proliferation of competing Member State interests with more divisions than in previous negotiations. Against that backdrop, withdrawal of the proposals is an increasingly likely move from the new European Commission.

ECRE maintains that the 2016 proposals tabled by the Commission constituted a worrying lowering of protection standards and were based on a flawed vision of outsourcing responsibility for refugees to regions outside Europe. ECRE therefore supports withdrawal of most of the proposals. The focus needs to be compliance not reform, with two exceptions: First, while Dublin IV should be withdrawn, ultimately legislative reform of the Dublin system is needed. Second, a new legal base for EASO and its transformation into the EU Asylum Agency (EUAA) remains necessary.

Real reform of Dublin is needed for the EU to break away from the intrinsically unfair, unworkable, and expensive mechanism for allocating responsibility among Member States. In the short to medium term, however, the CEAS will continue to operate under the existing legislative framework, including the Dublin III Regulation (604/2013). The law in force should be read and implemented in compliance with refugee and human rights law in order for EU countries to develop functioning asylum systems and to avoid the risk of a perpetual state of political crisis on refugee protection. The Commission holds the institutional power and responsibility to support for promotion of compliance. In this Policy Note, ECRE suggests the actions need to refocus resources and attention on compliance, rather than unnecessary reform.

ECRE suggests concrete actions of monitoring compliance with the acquis, evaluation of legislation, guidance to support compliance, enforcement and infringement procedures, and outlines a set of immediate and mid-term recommendations to the European Commission:

(III) Publish guidance on the suspension of transfers and assumption of responsibility for asylum applications pursuant to Articles 3(2) and 17(1) of the Dublin III Regulation where a country cannot guarantee that an applicant will be treated in line with the asylum acquis or is facing particular pressure. To ensure compliance with human rights, guidance should include the circumstances under which Member States should obtain individual guarantees from their counterparts before performing a transfer, and the content of such guarantees.

(IV) Re-orient action towards compliance with the CEAS, rather than legislative reform (with exceptions of Dublin, where a reform will ultimately be required, and the EUAA proposal). Invest sufficient resources in compliance.