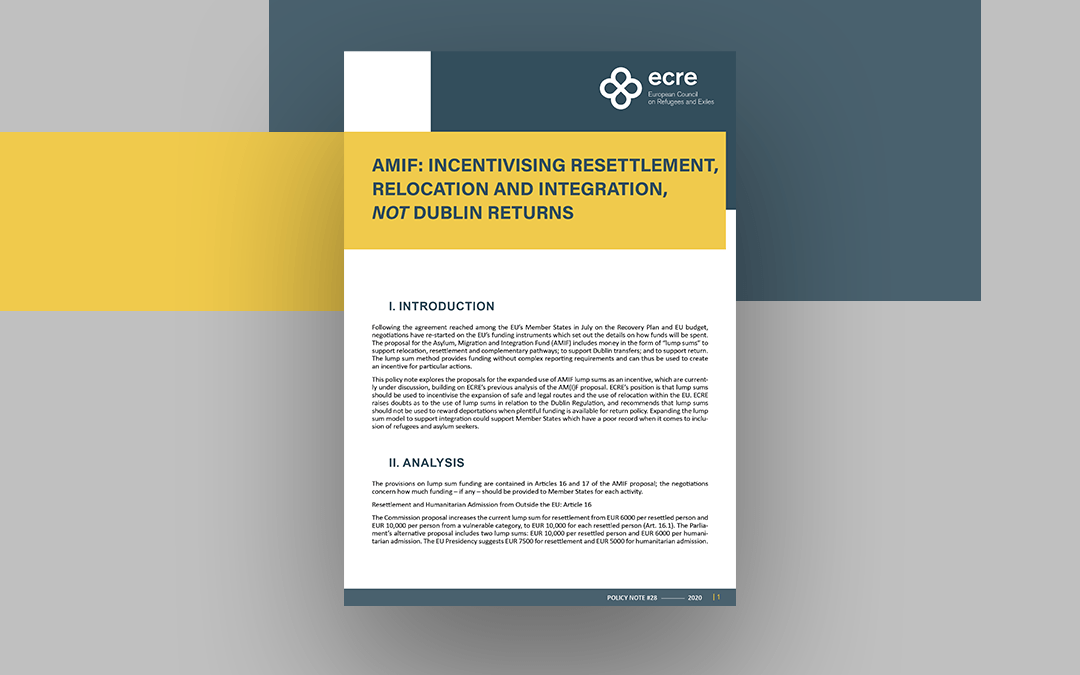 In its latest Policy Note ECRE publishes proposals for using AMIF lump sum funding as an incentive to encourage resettlement, relocation and integration.

Following the agreement reached among the EU’s Member States in July on the Recovery Plan and EU budget, negotiations have re-started on the EU’s funding instruments which set out the details on how funds will be spent. The proposal for the Asylum, Migration and Integration Fund (AM(I)F) includes money in the form of “lump sums” to support relocation, resettlement and complementary pathways; to support Dublin transfers; and to support return. The lump sum method provides funding without complex reporting requirements and can thus be used to create an incentive for particular actions. (The acronym AM(I)F is used as the name change is ongoing.) The proposal for a Regulation on Asylum and Migration Management, published on 23 September, amends the 2018 AM(I)F proposal, including increasing the situations in which lump sum funding can be used.

The policy note explores the proposals for the expanded use of AM(I)F lump sums as an incentive, which are currently under discussion, building on ECRE’s previous analysis of the AM(I)F proposal and in particular the Follow the Money III report, published by ECRE and UNHCR. ECRE’s position is that lump sums should be used to incentivise the expansion of safe and legal routes and the use of relocation within the EU. ECRE raises doubts as to the use of lump sums in relation to the Dublin Regulation, and recommends that lump sums should not be used to reward deportations when plentiful funding is available for return policy. Expanding the lump sum model to support integration could support Member States which have a poor record when it comes to inclusion of refugees and asylum seekers.