ECRE Comments: On the European Commission Proposal on the Asylum and Migration Fund (AMF) 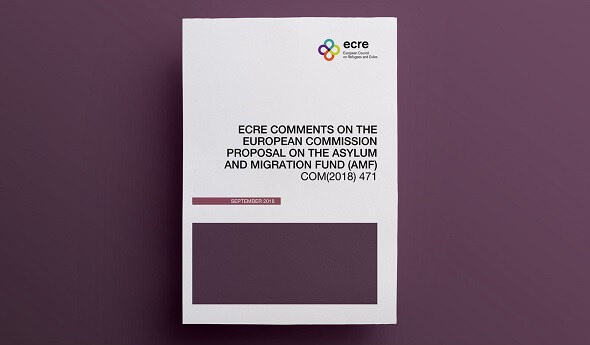 ECRE has published its Comments on the European Commission’s Proposal on the Asylum and Migration Fund (AMF) which is currently being negotiated as part of the legislative proposals for the next EU Multiannual Financial Framework (MFF) 2021- 2027. The Comments include analysis of some of the main provisions of the proposal as well as recommendations to the European Parliament and Member States.

The overall MFF proposal foresees a significant increase in the amount of money awarded to migration and border management. As part of this, the amount of money to be allocated to AMF is suggested to be 10.4 billion Euro, which constitutes an increase from the initial allocation of the current funding period but falls well short of the suggested five-fold increase in the budget awarded for border management. The AMF can play a considerable role in ensuring fair and effective asylum systems in Europe, returns in dignity of third country nationals and contribute to the harmonization of standards in relation to asylum, reception conditions and integration.

For this to happen, the central objective of contributing to European asylum policy has to be stated more clearly. As part of effective implementation of EU funding, it also has to be ensured that EU resources are allocated according to needs. The suggested allocation of resources to Member States national programmes risks skewing funds according to numbers of return decisions and affected returns while the needs on improving asylum and supporting integration receive less attention. This, as well as the lack of allocation and spending requirements for asylum and integration priorities risks that certain Member States maintain a poor standard of asylum and integration services.

Transferring the bulk of the responsibility for support of integration of third country nationals to the proposed European Social Fund + (ESF+) is a welcome development as it underlines the need to consider this area within the broader work of building inclusive societies. However, it does not come without its challenges. It must be ensured that across the two funds, an adequate amount of support is dedicated to the integration of third country nationals, that individuals do not fall between the cracks of different funding mechanisms and responsible authorities at the Member State level and that support can be provided to asylum seekers, those whose claims have been rejected as well as people with precarious status.

Finally, ECRE calls for a strengthened partnership with civil society in the implementation of the AMF and for defining and limiting EU internal asylum funding spent outside the EU. Where external spending of funds is referenced, this must be made conditional on the third country concerned complying with its obligations under international human rights law.