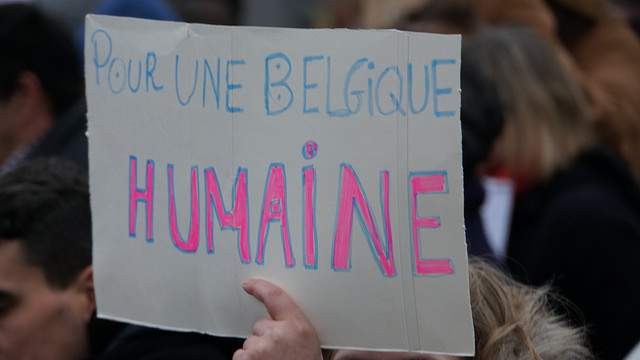 Between 1200 and 2500 people gathered at the feet of the Manneken Pis last week to protest the holding of four children in a detention centre in Belgium. The crowd, led by the initiative #NotInMyName, decried the ‘inhumane’ policies of the Belgian authorities and called for Theo Francken, the Minister of Asylum and Migration to reverse the decision.

The family, originally from Serbia, applied for residency on humanitarian grounds in 2011 and 2012, but had their applications rejected. Upon refusal to leave voluntarily and after absconding from an open facility in 2017, the family were detained in the closed facility at 127bis, located in Steenokkerzeel. The four children are between 1-6 years old.

The case marks a significant shift in Belgian asylum policy. Since 2009, following a judgement from the European Court of Human Rights, Belgium has prevented the detention of minors in asylum cases instead setting up open houses to accommodate families awaiting removal. However, in a move which has drawn criticism from the Courts in Strasbourg, Theo Francken has reinstated the decade-old policy of detaining children and established short-term detention units for families who abscond from the open housing system.

The Serbian family are the first to be subjected to these changes, sparking outrage across the capital. Protestors denounced the return of detention facilities for children, chanting, “We don’t lock up children”. The symbolic significance of Manneken Pis was not lost on those calling for change – demonstrators said that the small statue was the only child in Belgium that should be behind bars. Over the weekend two members of the feminist collective Femen attracted further attention to the issue, by protesting topless at the flower carpet at Grand Place in Brussels. Written across their chests read, “This is not a scandal, locking up children is”, and across their backs, “Shame on Belgium”.

Minister for Asylum and Migration Theo Francken defended the decision to detain the children, presenting it as a last resort.  Writing in his personal blog, he said, “Nobody locks up children for fun. I’m not doing this for my own pleasure. But in some cases it’s unavoidable. As Secretary of State I have to apply the law on foreigners, and the law is clear: someone who has no right to remain in the country is in breach of the law, and has to leave.”

However, Amnesty International Director Philippe Hensmann stated, “The impact for children of this kind of confinement is terrible. They find themselves literally in prison while their parents have committed only one fault: wanting a better life.”