Balkans: New Brutal Pushbacks from Croatia to Bosnia, where a Humanitarian Crisis Unfolds 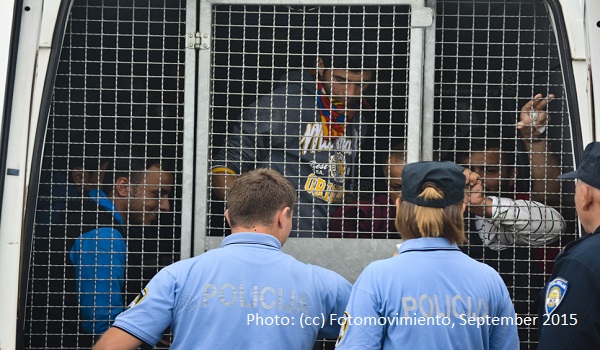 Croatia has dismissed allegations of brutal violence by its border police after new testimonies collected by the Danish Refugee Council (DRC) of Croatian police beating, robbing and sexually abusing people on the move and pushing them back to Bosnia. Ylva Johansson, Commissioner for Home Affairs, expressed her concern stating on twitter she would take the reports “very seriously” and that “Croatian authorities have committed to investigate reports of mistreatment at their external borders, monitor this situation closely and keep the commission informed on progress made”. During the EU-Western Balkans ministerial videoconference, Johannsson emphasised that the management of borders needs to fully respect fundamental rights.

While the allegations have entered political discussions, DRC has collected more testimonies of abuse by Croatian border patrols in the Croatian-Bosnian border region. A group of 23 people was intercepted by Croatian police after crossing the border from Bosnia. “We were stripped naked and ordered to form a line and put our hands on the shoulders of the man in front. They had just robbed us, beaten us with batons and wooden sticks” one of the survivors told DRC. Furthermore, one of the group was sexually assaulted with a tree branch by one of the police officers. It is the second case of sexual assault documented within a few days by DRC. Border Violence Monitoring Network (BVMN) has documented similar cases. “How can I apply for asylum or expect to be given protection from a country whose police officers force me to strip to my underwear and [sexually assault me] in front of my wife and children?” one of the survivors told BMVN.

On the other side of the border, in northern Bosnia, a humanitarian crisis unfolds as winter approaches and thousands of people remain without protection. Since the closure of the migrant accommodation centre Bira in Bihac, that forced thousands of people to sleep rough, the situation has further worsened. In November, local elections will be held and migration receives notable attention in the electoral campaign. Local politicians have verbally attacked people on the move for months and stirred hostility. Mustafa Ružnić, prime minister of the Una-Sana canton said: “You have to be careful: Migrants walk past you, they break into houses. Nothing is sacred to them. The people has said: ‘Enough is enough!’”.

Not only migrants, but also people who support them are targeted and even criminalised, and providing support has become increasingly difficult. Offering accommodation or a lift to people on the move has been prohibited by the Una Sana canton’s government. These bans are illegal as only the central government has the mandate to impose them. However, Sarajevo remains silent.