Balkan Route: Thousands Stuck at External EU Borders Face Destitution and Violence from Locals and Those Keeping the Gate Closed 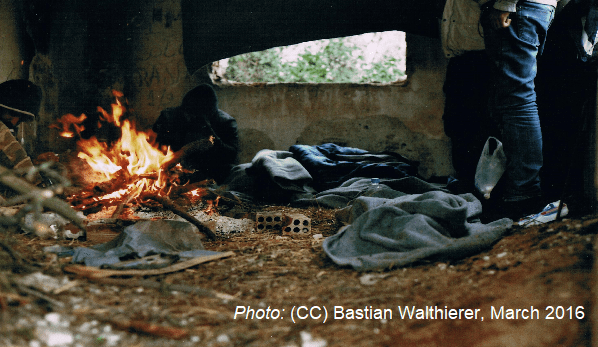 Local authorities in Krajina emptied a reception centre and restrict access to others, despite available capacity, leaving more than 2,500 people without shelter. New attacks by local residents towards people on the move occurred in Velika Kladuša municipality. In northern Serbia, the situation is similarly tense with many people sleeping rough and reported incidences of Serbian police destroying their tents. With intensified controls at the Hungarian border, people have been turning towards Romania where violent pushbacks are frequent.

On 30 September, authorities evicted the 350 residents from the migrant accommodation centre Bira in Bihac and transported them to Lipa, a camp that was already full, meaning they had to sleep in the open. According to The Guardian, another camp in the north-western region Krajina which currently accommodates 700 people is planned to be emptied in the upcoming days. Local authorities have been restricting access to reception centres throughout the region, despite available capacities. An IOM-run centre currently operates at only one third of its total capacity, hosting just 500 people instead of 1,500. In addition to emptying and limiting access to reception centres, local authorities have evicted people on the move from city centres to remote forest sites where access to food, water, and sanitary infrastructure is lacking. Meanwhile, police forces have prevented those evicted from returning to the cities.

Already before the latest evictions, about 2,500 people – roughly one third of those currently stuck in Bosnia – were forced to sleep rough in the woods or in abandoned buildings. In a forest close to Velika Kladuša, 300 people who had been expelled from the city have built tents using plastic tarps and sticks, to establish a makeshift camp. “What is the sad part of this is that this is absolutely unnecessary in the sense that we have financial resources, provided mostly by the European Union, to provide (for) and take care of all those people,” commented IOM-official Peter Van der Auweraert the situation. So far, Bosnia has received 60 million euros in emergency funding, mainly for running the seven reception centres which are equipped to accommodate more than 7,000 people in total.

In Velika Kladuša municipality, four men who had stayed in an abandoned house were tyrannised for days by a dozen local residents. The group was attacked with knifes and tasers and had to flee their shelter as it was set on fire. A woman interviewed by a local newspaper said that the group was beaten so violently one could hear their screams throughout the settlement. Violence by locals towards people on the move is on the rise in northern Bosnia and adds to the abuse by state officials at various regional borders during pushback operations.

In the north of Serbia increasing numbers of people are also staying outside of camps. Local activists report that people are returning from Bosnia given the devastating conditions they find there. Further, the change in season pushes people who are already in the country to its northern borders to resume their journeys before winter hits. Both factors contribute to increasing numbers of people staying in northern Serbia. Conditions are harsh and crossing the borders to Croatia, Hungary, or Romania remains extremely difficult. Reportedly, Serbian police forces have destroyed tents in different locations over the past two weeks. Activists struggle to provide for people in need of food, clothes and medical care due to the increasing demand. Given the fact that people frequently lose everything they carry during pushback operations – as their personal belongings get burned or stolen by police officers – the need for distributions is even higher.

Partly due to intensified border controls at the Hungarian border more and more people try to reach the EU via Romania. But also here, violent pushbacks are common. A local NGO estimates that “at least fifty” people are pushed back from Romania to Serbia every day. Similar to pushbacks at other borders in the region, the incidences often include extreme violence. Recently, a group was whipped by Romanian police. In another case, a man with an amputated leg was beaten with his own crutches.

According to UNHCR, there were more than 16,000 refugees, asylum seekers, and displaced people in the Balkans as of August 31. Serbian government sources say the country hosts about 30 % more migrants than it did at the same time last year. An estimated 150 people are entering Serbia from the south every day. About 8,500 are currently stuck in Bosnia.