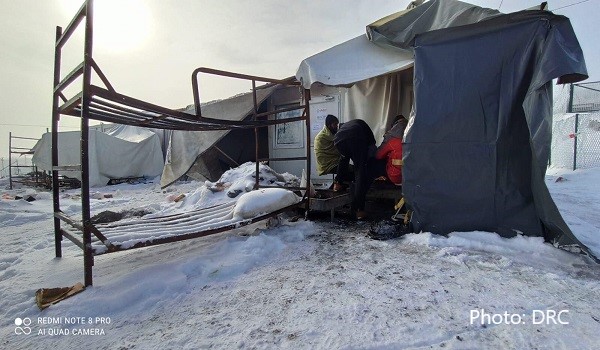 Heated tents have been set up at the burned-down Lipa camp in Bosnia and Herzegovina (BiH), but the humanitarian situation remains highly alarming as many are still sleeping rough and temperatures dropping. Court ruling and intervention in pushback cases from Slovenia and Croatia. Hungary to receive a formal EU Commission notice as the country ignores an EU court ruling on asylum and continues to push people back to Serbia.

Over last weekend, 750 people at the burned-down Lipa camp in northwestern BiH were housed in heated tents set up by state authorities. Heavy snow-falls had slowed down emergency works, Western Balkans co-ordinator for the International Organization for Migration (IOM), Van der Auweraert wrote on twitter. After spending weeks without shelter in freezing temperatures, many suffer from respiratory and skin infections medical workers have warned. Health checks were carried out on Monday but according to ECRE member the Danish Refugee Council (DRC) it was not clear “whether this is COVID-19 or this is any other kind of respiratory infection.” The set-up of the newly provided tents does not allow for social distancing as a precautionary measure. Lacking basic infrastructure such as power and water supply, the camp site remains unsuitable as a long-term accommodation structure.

While journalists have reportedly been denied access to the camp site, visual material produced by camp residents and organisations present on the ground has been widely distributed on social media, showing people washing themselves in the snow and wearing sandals and clothes not suitable for the harsh weather conditions. In the forests around Lipa, Bihać, and Velika Kladuša, hundreds still fend for themselves in makeshift camps or abandoned buildings. On-going political resistance prevents access to accommodation for those sleeping rough. The re-opening of Bihać’s Bira camp – which had been fully equipped through EU funding but closed by local authorities in September “can in no circumstances be used as a migrant camp”, the city’s mayor announced in a press release. The weather forecast for Bihać for the weekend predicts temperatures as low as -13 °C during night time. Over the past years, numerous people have frozen to death across the Western Balkans repeatedly.

In a call with BiH’s president and Chairman of the Presidency Milorad Dodik on 11 January, Josep Borell, EU’s High Representative for Foreign Affairs and Security Policy, called for an even distribution of reception centres across the country and stressed that failing to do so would have “severe consequences” for its reputation. According to Dodik, the Republika Srpska continues to stand by its position of not accepting reception centres on its territory. Further, he stressed that the EU should “take full responsibility” for those in transit.

Amnesty International together with other human right organisation published a statement describing the situation in BiH as “a direct consequence of EU’s migration and asylum policy that protects external borders and shifts responsibility for ensuring protection of migrants and asylum-seekers to the neighboring countries”.

The widespread use of systematic pushbacks – often involving severe violence – limits options to move on from BiH. In a case of a chain pushback from Slovenia through Croatia to BiH in August 2019, a Slovenian court established that by handing the applicant over to Croatian authorities on the basis of the readmission agreement between the two countries, “the Republic of Slovenia violated the applicant’s right to prohibition of collective expulsions, his right to prohibition of torture and his right to access to the asylum procedure”.

In a case concerning three Syrian nationals who were pushed back from Croatia to BiH, in which the Commissioner for Human Rights at the Council of Europe intervened as a third-party, the Commissioner has recently published her written observations for the European Court of Human Rights. Referring to mounting evidence, the Commissioner speaks of “the existence of an established practice of collective returns of migrants from Croatia to Bosnia and Herzegovina, which are carried out outside of any formal procedure and without identifying the persons concerned or assessing their individual situation”.

Following reports by ECRE member the Hungarian Helsinki Committee (HHC) that Hungary is ignoring a EU court ruling on asylum from December, Hungary will be receiving a formal notice from the European Commission. According to the judgement from 17 December, Hungary had breached EU asylum laws by legalising pushbacks to Serbia. The practice continued nevertheless and “since the judgement came out almost 2,500 push backs took place,” András Lederer from the HHC said. In a letter letter the organisation asks European Border and Coast Guard Agency (Frontex), currently facing investigations by the EU fraud office OLAF, to reconsider its presence in Hungary given violations of the ECJ judgment.