Austrian Presidency: to focus on external borders rather than internal solidarity 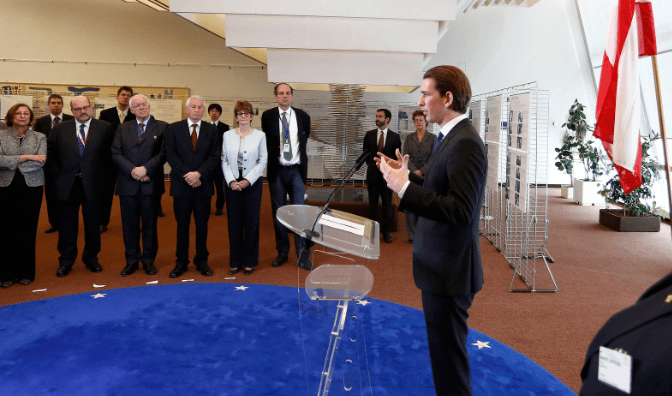 Revealing its first visions of the Up-coming Austrian Presidency of the Council of the European Union, Chancellor Sebastian Kurz is announcing a focus on ‘securing external borders’ rather than ‘only dispute over redistribution.’

Euroactiv quotes Chancellor Sebastian Kurz for the following statement at a news conference on the priorities of the Austrian Presidency: “Our aim is very clear – that in Europe there should not only be a dispute over redistribution (of refugees) but also, at last, a shift of focus towards securing external borders.” The Chancellor is elected for the Austrian Peoples Party (Österreichische Volkspartei, ÖVP) in government coalition with the Freedom Party of Austria (Freiheitliche Partei Österreichs, FPÖ) the alliance and government programme marked a step to the right and the introduction of what has been widely interpreted as an anti-migrant agenda.

Hungary is looking to broaden coordination on migration policies beyond the so-called Visegrad Group: “What we definitely would like to do is to have a closer and more efficient cooperation with Austria and of course hopefully with the upcoming Italian government,” stated Hungarian Foreign Minister, Peter Szijjarto while also underlining that there was no intention to formally expand the alliance.  A joint statement on migration from the Prime Ministers of the four countries in the Visegrad Group illustrates the strong focus on external border control and the European Commission has imposed infringement procedures against three of its  members – Czech Republic, Hungary and Poland for non-compliance with their obligations to receive refugees under the relocation scheme.

“The Austrian Presidency of the EU is an alarming prospect and other Member States should resist the development of a broader anti-migration alliance. That said, there are still significant conflicts between these countries when it comes to migration, including between Hungary and Austria and between both of them and Italy. In terms of their plans, it’s hard to imagine more spending and attention going to the external borders – years of experience show that it is not the way to create a functioning asylum system in Europe,” says ECRE Secretary General, Catherine Woollard.