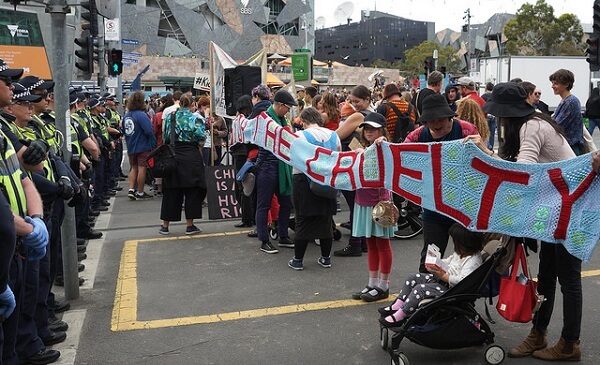 Human rights lawyers launched this week two class actions against the Australian government, on the grounds of the intentional infliction of harm upon refugees and asylum seekers in offshore processing centres, amounting to crimes against humanity and subjection to torture.

Two parallel class actions- a means by which representatives can bring a claim on behalf of a large group or class of persons- have been filed in the high court of Australia. The cases, led by Julian Burnside QC and lawyers from the National Justice Project, will represent all remaining refugees and asylum seekers detained by the Australian government in offshore detention centres on the islands of Manus and Nauru- more than one thousand people.

The basis of the actions is a breach by the government of its duty of care by subjected people to arbitrary imprisonment and the severe deprivation of physical liberty, denial of proper medical assessment and treatment, inadequate security and protection, inadequate food and water, inadequate accommodation, and an unhygienic environment. Refugees have been held on these islands for more than five years, during which time Medecins san Frontieres have reported the descent of a mental health crisis, inflicted by self- herm, suicide, and untreated medical issues, even amongst young children.

In 2017, following an earlier class action, supreme court Justice Cameron Macaulay approved a $70 million compensation pay- out to Manus island detainees, which Australia settled in preference to proceeding with a six- month trial that would have “heard evidence from detainees detailing deaths inside the detention centre, allegations of systemic sexual and physical abuse, and allegations of inadequate medical treatment leading to injury and death”.

Earlier this week an Iranian family also received compensation after suing the Commonwealth over their mistreatment while in the Australian detention facilities, having been “exposed to numerous psychiatric stressors while in detention” including witnessing detainees engaging in self-harm and attempting suicide, which was particularly damaging to young children.

In a number of instances the Australian federal court has received requests asking for urgent medical transfers for detained people. The Australian government spent $480,000 dollars fighting such transfers in the first quarter of 2018-19 alone.

Last week, a Senate filibuster prevented efforts by the non-government parties to pass legislation that would have removed refugees from Nauru and Manus, delaying the vote and adjourning the lower house, and in doing so avoiding what would have been the first time an incumbent government had lost a substantive vote for almost 90 years. Opposition Labor party deputy leader, Tanya Plibersek, said the government had defied custom by adjourning the House with unfinished business; “They’re walking out on a job half done because they are so frightened of the cross bench and Labor bringing sick refugees to Australia for medical treatment on doctors’ advice.”