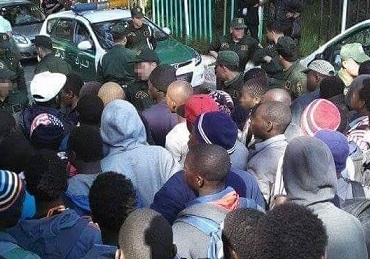 Human Rights Watch reports that Algerian authorities have deported more than 1,400 West African migrants to Niger since 1 December 2016. Although it is not the first time Algeria returns migrants to Niger, the latest series of mass deportations indicates more determined efforts and raise concerns for migrants across the region. The Algerian government has made no official statements about the operation.

According to the Human Rights Watch report released on Friday migrants were rounded up in the capital Algiers and transported 1,900 kilometers south to a camp in Tamanrasset, from which some were bused across the border to Niger. Media reported that officials in central Niger, the International Organization for Migration (IOM) and Human Rights Watch, stated that  a convoy of 50 trucks with at least 1000 migrants has arrived in Agadez in central. Giuseppe Loprete, the head of IOM’s mission in Niger, explains that 271 of the migrants were from Niger, whereas the other migrants were from West African countries, mainly Mali and Guinea Conakry.

Sarah Leah Whitson, Human Rights Watch Middle East and North Africa director, warns that a mass deportations of migrants, including men and women who may have fled persecution or have worked for years in Algeria is a violation of their rights. As a party to the 1951 Refugee Convention, Algeria is not allowed to forcibly return any recognized refugee, asylum seeker or any other foreigner to a place where they would face a threat of being persecuted, tortured, or subjected to inhuman and degrading treatment. Human Rights Watch stresses that the claims of anyone expressing such fears should be examined in full, and fair refugee status determination procedures should be completed before anyone can be deported.