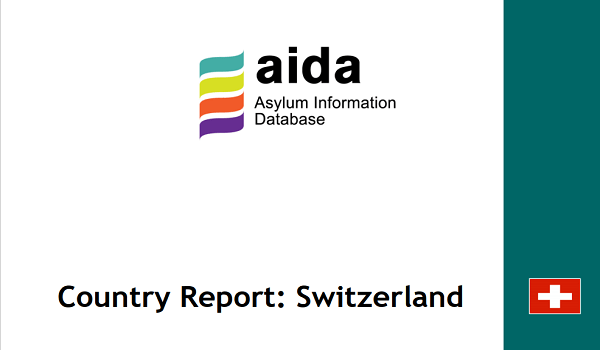 The updated AIDA Country Report on Switzerland provides a detailed overview on legislative and practice-related developments in asylum procedures, reception conditions, detention of asylum seekers and content of international protection in 2020.

The Swiss asylum system was substantially reformed in March 2019. Applications for international protection lodged prior to the reform are still examined according to the previous rules, which concerned a total of 6,340 cases in 2020. All new applications for international protection lodged after March 2019 are processed under the new asylum system, i.e. either under the Dublin procedure, the accelerated procedure or the extended procedure. Asylum seekers channelled into the extended procedures are attributed to cantons, while accelerated procedures are carried out entirely in federal asylum centres.

In 2020, there were a total of 11,041 applicants for international protection in Switzerland, mainly from Eritrea, Afghanistan and Turkey. The recognition rate at first instance stood at 74% while the number of pending cases reached 3,852 by the end of the year. The new asylum reform has resulted in an important decrease of the average duration of the procedure at first instance in 2020, although it remains above the time limits foreseen in law. The Federal Administrative Court also concluded in June 2020 that, in light of the different applicable appeal deadlines, a wrong assessment of whether a case is “complex” (i.e. thereby being channelled into the extended procedure or not) may constitute a violation of the right to an effective remedy. The Court thus clarified the criteria to define a case as “complex”.

COVID-19 did not significantly impact the functioning of the asylum procedure; i.e. registration remained accessible at all times and personal interviews were only suspended for two weeks at the end of March 2020. The Ordinance on Measures Taken in the Field of Asylum due to Coronavirus (Ordinance COVID-19 Asylum), in force since April 2020 and at least up until June 2021, foresees different measures on how to conduct personal interviews. It has also extended the time limit for lodging an appeal from 7 working days to 30 days for decisions taken under the accelerated procedure. As regards legal assistance, which is provided for free at first instance to all applicants for international protection, concerns over quality were reported in 2020, in particular the fact that the mandated legal representatives frequently revoke their mandate. Moreover, applicants who lodged their asylum claim prior to 1 March 2019 do not systematically have access to legal assistance and those who lodged their application in detention are not entitled to legal assistance.

Following the outbreak of COVID-19, the capacity of the federal asylum centres was reduced to 50% and then 60% of their usual capacity in 2020. Different health measures were adopted in reception centres, but distancing rules were hard to implement. In a few cases, reception centres were put in full quarantine for approximately two weeks. Another important issue reported in 2020 relates to the excessive use of force and violence in reception. Several criminal proceedings were initiated against security staff and a mechanism to prevent violence is currently being established. The authorities also announced in early May 2021 that a former federal judge has been mandated to carry out an independent investigation on these incidents. The identification of vulnerabilities, including psychological and psychiatric related issues, remains a significant challenge. According to the National Commission for the Prevention of Torture (NCPT), access to psychiatric care in federal asylum centres is limited in practice to the most acute situations.

Following an amendment to the Foreign Nationals and Integration Act (FNIA), the Federal Supreme Court ruled in March 2020 that detention for immigration related purposes must take place in dedicated and specialised facilities. In practice, however, asylum seekers and other foreigners continue to be held in prisons that are also detaining convicted persons under the penal code. In the context of COVID-19 and the impossibility to carry out removals due to travel restrictions, several people were released from detention. COVID-19 further resulted in important restrictions on freedoms and rights of detained people in the different detention facilities.