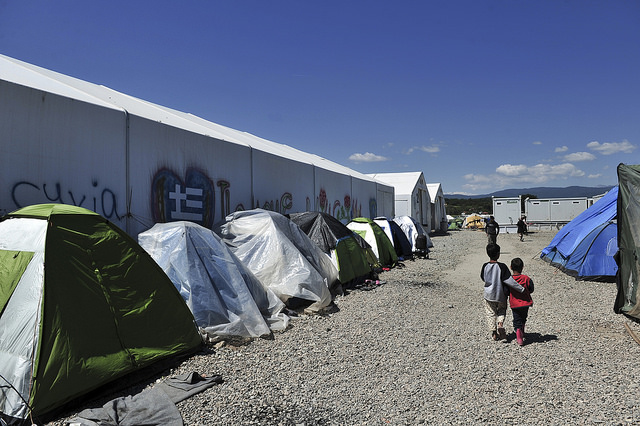 Cases of alleged push backs have been systematically reported at the Greek-Turkish land border of Evros. According to these allegations, the Greek authorities follow a pattern of arbitrary arrest, de facto detention in police stations close to the borders, and transfer to the border, accompanied by the police, where the push backs occur.

Access to asylum on the mainland continues to be problematic throughout 2017. Following pre-registration through Skype, a registration appointment is scheduled within 81 days on average, although there have been cases where the full registration took place more than 6 months after pre-registration.

A new medical vulnerability template has been adopted as of the end of 2017 and early 2018 for vulnerability screening in reception and identification procedures on the islands. This template makes a problematic distinction between cases of “medium” vulnerability and “high” vulnerability.

The “restriction of freedom” within the Reception and Identification Centre (RIC) premises is no longer applied on the islands. Asylum seekers are issued a geographical restriction, ordering them not to leave the respective island until the end of the asylum procedure. Persons arriving in the RIC of Fylakio near the Evros land border remain restricted within the premises of the RIC.

Asylum seekers who are apprehended outside their assigned island are immediately detained in order to be returned to that island. This detention is applied without any individual assessment and without the person’s legal status and any potential vulnerabilities being taken into consideration. In 2017, a total of 1,197 persons have been returned to the Eastern Aegean islands on that basis.

A “pilot project” is implemented on Lesvos, under which newly arrived persons belonging to particular nationalities with low recognition rates were immediately placed in detention upon arrival and remained there for the entire asylum procedure. While the project initially focused on nationals of Pakistan, Bangladesh, Egypt, Tunisia, Algeria and Morocco, the list of countries has been expanded to 28. More recently, Syrian nationals have also been detained upon arrival on Lesvos and Chios.