Aid with Dignity: An interview with Refugee Support Europe 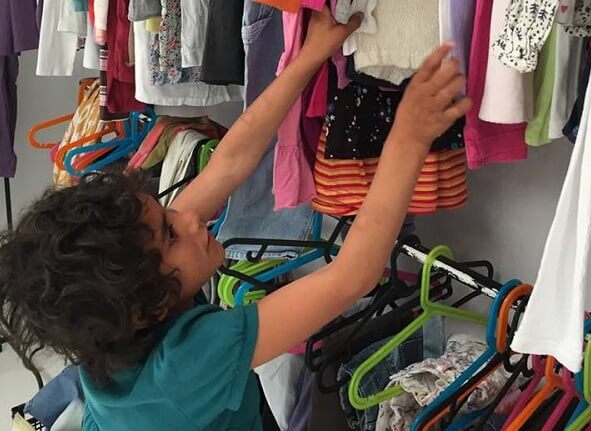 Paul Hutchings had been a market researcher for 25 years, and he and his colleague John Sloan had both been running their own businesses. They met when they both went to Calais in 2015 to try and help refugees that were stuck in the makeshift ‘Jungle’ camp.  They found that they were part of a huge movement of people who saw a desperate situation in Europe, and saw a failure of institutions to do something about it. In 2016 they turned their attention to Greece. Seeing the opportunity to make a difference to the 800 people who would come to stay at Alexandreia camp, John gave up on his retirement plans and Paul gave up his job to focus on it full time. Two and a half years later they are now running projects in 3 different camps.

Can you outline the history of Refugee Support Europe? When was it created and what motivated you to do so?

Refugee Support Europe was born in April 2016 after my colleague John Sloan and I began relief efforts in a camp in Alexandreia in Northern Greece, where authorities were trying to accommodate a large number of people whose asylum claims were being processed. The volume of arrivals had increased quickly, and Greek authorities were struggling to deal with the numbers. People were finding themselves in unprepared and overcrowded tented sites, most of which were derelict military encampments. The camps were run by authorities that didn’t have experience working in refugee communities, whereas my colleague and I had been working in ‘the Jungle’ in Calais for the previous 6 months. John, who was already in Idomeni to try and help the situation, appealed to the commander at Alexandreia, proposing that if he let us, we could help to provide for at least the most basic needs in what seemed to be an emergency situation. Eventually they obliged.

We had presumed that we would be there to assist people before they were able to move on… but its two and half years later, and here we are.

Can you tell us about your goals to deliver “aid with dignity”? What defines a ‘dignified’  approach?

We were in Calais for 6 months. We found it could be a very chaotic place where distribution was often unfair, undignified and messy. It could be very upsetting for people. But when we set up in Alexandreia, in what was already a more managed and settled environment, we felt we were able to focus on structuring the way people were assisted rather than just trying to keep up with needs and find ad hoc or improvised solutions.  We could use this as an opportunity to work toward our main ambition of providing aid with dignity- and we realised quickly that dignity really is something that changes according to context.

Achieving ‘dignity’ was a real learning process, and I believe our work progressed in what you could call three ‘stages’, each one trying to better address needs as the situation in the camp changed.

When we first arrived, we found people that had just arrived after having to live in squalid conditions on the Northern border, they had no money and they were exhausted, hungry, completely drained, and still living in tents. We built a ‘shop’ where people could come and collect a basket of the items that they would need, with everyone getting exactly the same in ratio to the members of their family. It was a calm and respectful system that prevented arguments and that we felt was working at that point in time.

But it soon became very clear that the people receiving these baskets perceived this as charity. It was handout; they had to queue for it, they didn’t have any choice of what they received, they just had to accept items that we thought would be right for them. We wanted to contribute in the best way possible, but we were finding that we were inevitably removing even the smallest of choices and it was of course disempowering. People were being kept here for increasing lengths of time, why should we expect that they would live every day as if it was a crisis situation? If someone likes to drink tea, why should we decide that they will have to drink coffee?

So to move away from this, we entered into what we would call our ‘second stage’. We decided to create our own ‘currency’ to be used in the shop. It worked in a simple system of points that were relative to local product value. The shop was always stocked and its opening hours the same; a child would always get 50 points, an adult 100 points, a pregnant woman 150 points. There would always be a volunteer to welcome them: everything else was completely up to them. People could use their ‘money’ for what they actually wanted to buy, whether it be fresh fruit and vegetables, dry goods or toiletries.  We were please to find that the currency system was honoured. We saw developments that made us confident that this method was at least instilling some sense of normality into the camp. When we had been distributing the baskets, families had started to become indifferent and send their kids along to collect them because they knew they would just get whatever they were given. But when we started distributing this currency the whole family came shopping together, like any family might. We could sell the ingredients and people would cook the meals that they wanted.

The ultimate aim of any relief organisation should be to be able to hand power from volunteers to the people living in the camp- and this new shopping system moved us closer to that end. Of course no one should have to live in these conditions; your future is uncertain, your family is scattered around the world, you are hostage to bureaucracy, you live with people you don’t know, people tell you what you can and can’t do-but at least we could in our modest way contribute to a feeling of empowerment.

Nevertheless, we printed the money, we built the shop, we kept it stocked- this will always bear connotation of ‘charity’. The camp population we meet want to earn their own money, support themselves, support their family. This actually matches the donors wish to see their contributions bringing sustainable improvement and tangible success. So at one of the camps in which we work- Katsikas- we have now entered our ‘third stage’.

We felt that people could be even better empowered if we encouraged entrepreneurship. We decided that if a refugee at Katsikas had a business idea that they believed could be successful in the camp setting, we would award soft loans of up to 1000 euros, technical assistance, business coaching, and help with all of the necessary admin (registering and getting a tax number) for them to build this as a business model in Greece. We completely understand that we probably won’t get the ‘soft loans’ back as for some people it might never take- off, but for others we are seeing that their ideas can be hugely successful! That is I guess the reality of entrepreneurship.

Can you explain the ideas behind the empowerment fund and how it works? What sort of response have you had to the concept?  Do you think the Empowerment Fund can have a positive impact on integration?

We asked people to compose their business proposals on one piece of A4 paper. One of our trustees arrived in the camp to help us translate, and we visited each candidate to sit down and talk their idea through.

We had 16 proposals almost straight away. 3 were from families with more than one proposal, so we decided that we could only give one loan per family. A fourth wanted to start their project in Athens, but we felt we needed to stay in the area in which we worked for the moment. So we got to work on the 12 proposals.

The first loans were awarded in August. It’s a lengthy process- the administration and bureaucracy can be extensive in Greece- but we are making sure that these requirements are met so that this can really be a venture about integration, and can ensure that the regulators are in this with us rather than trying to shut us down. It also takes time to deliver the best coaching that we can, but we also see capacity building as integral to the project.

All of the proposal we received are still works in progress, but at least 6 are very successful! We’re seeing some impressive entrepreneurship.

Mohammed and his wife are supporting five children. He is now making his own Syrian cheese- a speciality with fennel seeds – and yoghurt that people in the camp are loving. He is sourcing his milk from a local Greek goat farmer- we are just there to help him scale- up his production.

Amal is a widow with two teenage children to support. She is teaching English in the camp as well as Arabic to a local Greek customer. She might never make a huge return because the people in camp cannot pay that well for lessons, but she is managing and this is of course not only a question of financial return.

Mahmood is manufacturing natural, vegan fragrances. He has been to Athens on his own initiative to buy the raw materials he needs. With natural fragrances there are apparently issues with longevity and residue- he has already navigated this and he’s branded the bottles with his name and logo. He will start making soap soon too.

We are fully committed to these 12 proposals, but to some extent we also have to see them as a pilot. When we feel really confident with our model we want to roll it out to the rest of the camp, which we know is about to have another 500 arrivals who will too want to do something with their skills and their time, as well as to extend it to the other camps in which we work. There are also a number of refugees who are homeless or living in squats in host cities- and we will endeavour to engage these people as well.

This would never have been possible when we first arrived in Greece. Everyone in these camps in 2016 just wanted out of there- they didn’t want to give in to the idea of being held where they were. In reality most of them were there for a year to 18 months.

Now people’s ideas have changed. Some still want to move on, others are ready to build their lives in Greece. Either way there is still huge potential for them to develop and work on a business that can serve this community, and why not the rest of the world?

The very nature of flight- of managing to survive the journey to Europe- means that resourcefulness and resilience in the camp is in abundance. At the same time volunteers always arrive with new ideas and fresh energy and enthusiasm. Their frustration with the situation for refugees and commitment to help can be channelled into incredible productivity.

I believe that the most important thing we can do is to stand shoulder to shoulder with these people in solidarity, we will bear witness to the situation that they are living through, and we will communicate this to the rest of the world; it is to hand back the power, to prove that we believe in, respect, and value our friends in the camp as the capable humans that they are.

For more information about Refugee Support Europe visit their website.